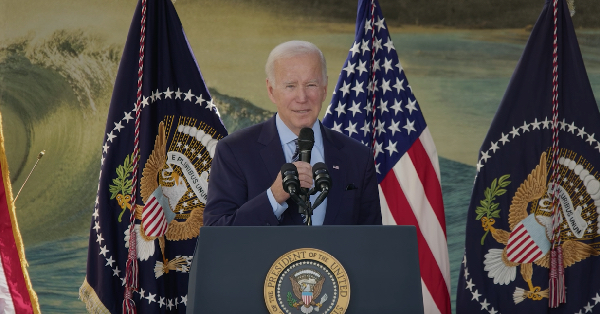 The President spoke to employees and media at the company’s Carlsbad, CA campus

President Joe Biden visited Viasat’s Carlsbad, CA campus during a Southern California visit, and offered remarks to assembled employees and media. The President commented on Viasat’s long commitment to hiring veterans as they transition from military to civilian life — noting these employees and those at other companies that drive innovation through advanced technology will benefit from passage of the President’s CHIPS and Science Act, which would lead to more semiconductor production in the US.

President Biden complimented Viasat’s dedication and commitment to veterans and their families through hiring events, trainings, and transition programs — as demonstrated by the company’s San Diego workforce, which is comprised of 14% veterans — as well as the company’s recognition by the U.S. Department of Labor for its continued investments in recruiting, employing, and retaining veterans with the HIREVETS Medallion Award. Overall, Viasat has over 700 veteran employees spread across its offices throughout the U.S., and has been consistently recognized for its efforts to help veterans transition to civilian life.

Pandemic-era supply disruptions and a dearth of domestic chip manufacturing hindered American companies — including Viasat — which rely on these critical components as part of their innovation engines. As the President noted, the overwhelming majority of semiconductor manufacturing is currently done outside of the U.S., in foreign countries — in fact, U.S.-located fabs only account for around 12% of the world’s semiconductor manufacturing, down from 37% in 1990.

During his time on Viasat’s campus, President Biden highlighted the role the CHIPS and Science Act will play in helping American companies reduce their reliance on overseas chip manufacturers, lower costs for American consumers, create jobs, and help companies like Viasat provide vital connectivity for consumers, businesses, and governments around the world.

Viasat is honored to have hosted the President of the United States, and is a committed partner in helping our government create greater connections for all Americans.