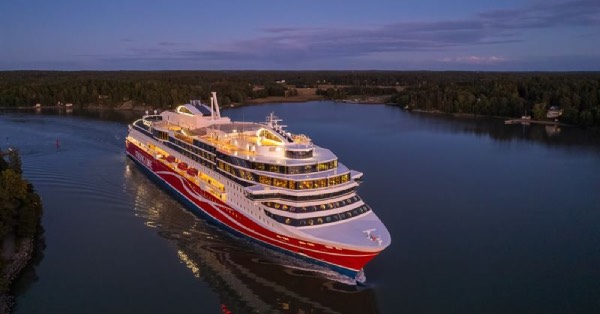 Viking Line has been named both the Sustainable Business of the Year and the Transport Company of the Year at the Finnish Travel Gala. One factor that weighed heavily in both choices was the shipping company’s long-term investment in environmentally-friendly technology and in innovations that renew the passenger experience.

At the Finnish Travel Gala finals, Viking Line was in the running for as many as three categories: Sustainable Business of the Year, Transport Company of the Year and Most Unforgettable Travel or Service Experience of the Year. The company was named the winner in the first two categories.

“We have already been working more than 60 years for safe, sustainable maritime traffic, and using that same recipe we are creating the travel experiences of the future. The double honour we have been awarded means an especially great deal to us after these exceptional years of pandemic, which has hit the entire travel industry hard. A big thank you to the voters and the jury – and of course to all our customers – on behalf of all us Vikings!” says Ninna Suominen, Vice President of Marketing at Viking Line.

Viking Line has six vessels in service on the Baltic Sea, and more than six million passengers and 130,00 cargo units sail with them each year. The company is Finland’s largest employer in maritime transport and has the most vessels sailing under a Finnish flag of all passenger transport companies.

Over the past ten years, Viking Line has invested a total of 450 million euros in the two most climate-smart  vessels on the Baltic Sea: Viking Grace, which made its maiden voyage in 2013, and Viking Glory, which launched service in March.

“Because of our roots in the archipelago, the protection of the Baltic Sea has special importance to us at Viking Line. Our sustainability work began as far back as in the 1980s, and our climate-smart Viking Glory is the latest milestone on this journey. With the new vessel, we can offer our customers more with less consumption,” says Dani Lindberg, Sustainability Manager at Viking Line.

Viking Glory is larger than its sister ship, Viking Grace, but consumes about ten per cent less fuel. Viking Glory is considered one of the world’s most energy-efficient vessels in its category. Examples of technological innovations are recycling of waste heat and cooling, the world’s most efficient low-emission and LNG-powered engines, air conditioning and lighting that are regulated automatically depending on the booking situation, an energy-efficient Azipod propeller system and a hull designed to reduce the formation of waves.

Viking Glory started serving the Turku-Mariehamn-Stockholm route in March. The vessel has set a passenger record in just a few months: at the end of October, nearly one million passengers had already travelled with Glory. In addition to Viking Line’s traditional target groups, the new vessel has also attracted young people, for example, to the waves of the Baltic to a greater extent than before.

“To our great joy, demand for cruise tourism has quickly recovered, and we set an all-time passenger record on the Turku-Mariehamn-Stockholm route this past summer. Glory added about ten per cent more passenger capacity on the route, and cargo capacity is a full 60 per cent greater compared to Glory’s predecessor, Amorella. We have a responsible role in maintaining our country’s security of supply; 90 per cent of exports and 70 per cent of import are transported by sea,” says Ninna Suominen.