“Our greatest asset is our people with in-depth local knowledge, skills and passion, as well as the right attitude, motivation and leadership to handle this 24/7 business and the diverse challenges of voyage transits on the continent,” he says.

Richter believes it is important to play to the strengths of the company’s 300-strong workforce spread across nearly 45 ports on the African continent with wide expertise in special local operating conditions, while functioning as a team as part of a global support network.

In other words, “a world of local expertise”, he says.

“No port call is the same and each one carries different risks and challenges that can only be resolved through having professional staff on the ground trained to tackle such issues with the focus on risk and cost mitigation for the shipowner,” he explains. 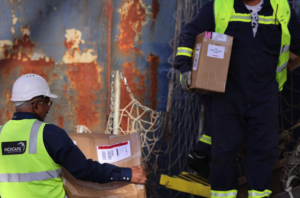 Thousands of vessels pass through African ports each year ranging from drybulk vessels carrying cargoes such as steel, grain and coal, oil tankers and containerships to cruiseships, naval vessels, barges and yachts, with Inchcape handling about 1500 port calls annually.

A number of ports specialise in certain cargoes – for example, Mombasa in Kenya is a hub for grain and steel shipments and South Africa’s Richards Bay has various coal terminals – while Kenya also has a container depot, Namibia’s Walvis Bay is a strategic location for drydocking, repairs and lay-ups for offshore vessels and Port Louis on Mauritius is a key bunkering port.

Richter says “one of Inchcape’s main strengths is that we are an all-rounder able to handle all different types of vessels”, with port agency, husbandry including crew changes, bunker calls, third-party liner agency, owners’ protective agent (OPA), P&I representative, ship chandlering and cruise consultancy among the comprehensive services provided by the company.

Given the high number of ports catering for different cargoes, navigating the plethora of complex local operational procedures, rules and regulations can be difficult for shipowners calling at African ports, while there is also a high risk of bribery and corruption.

Compliance and security is a particular challenge in some countries and therefore one of the key roles for Inchcape is serving as OPA to safeguard the interests of the shipowner by ensuring local regulations are followed to avoid delays and additional costs, according to West Africa Area Manager PT Ramdass.

He highlights the fact that minor rule deviations found by customs and immigration officials boarding vessels can result in cumulative fines of as much as $20,000 per vessel on average.

Providing guidance for the ship’s master on official documentation and acting as a witness of  procedures onboard is therefore a vital duty of the OPA, as well being available for assistance 24/7.

“The ship’s master will initially be provided by Inchcape with a checklist of do’s and don’ts pre-arrival to prevent problems with the authorities. Subsequently, an Inchcape boarding agent will embark on the vessel on arrival to secure immigration, customs and port clearances to avoid hefty fines or even vessel detentions in some cases,” Ramdass explains.

All Inchcape employees practice the company’s zero-tolerance policy on bribery and corruption as part of a strict code of conduct, as well as stringent QHSSE standards based on international regulations that are applied across its African operations and cover issues such as welfare of personnel with crew changes.

And Ramdass believes this operational integrity is a competitive strength given increasing demands for compliant and transparent port agency services from shipowners and industry stakeholders.

Transparency also extends to proactive communication with a vessel prior to arrival to inform of possible risks or delays, provide useful contact details while at port and valuable information on berth availability based on Inchcape’s knowledge of other ship movements.

Richter points out that congestion is a major issue at African ports as development of dock infrastructure has largely lagged countries’ economic growth and increasing ship traffic volumes.

Given the lack of a berth booking system at most ports, this can be countered by giving timely information to enable ships to sail faster to take advantage of available berths, thereby avoiding waiting time and voyage delays that can incur demurrage costs.

The efficiency of cargo discharging and loading operations at African ports is a further challenge as this is labour-intensive and can be adversely affected by crane and other machinery breakdowns, according to Richter, adding “this cannot be compared with European ports” with a high level of automation.

In its role as OPA, Inchcape can hold the charterer’s agent responsible for cargo release to protect the shipowner’s interest and thereby safeguard against significant demurrage cost liability in the event of port delays. The OPA is also able to segregate the interests of the owner and charterer’s agent in relation to different activities such as crew changes and underwater inspections.

Indeed, managing and mitigating costs is a key factor with African port stays as expenses, such as for inland container transport, can sometimes come as a shock to shipowners.

Inchcape’s strategic procurement policy is geared to sourcing services like crew transport, hotel bookings or launch boats at competitive rates from a network of local vendors that are audited annually for QHSSE compliance, while its global buying power also benefits procurement. 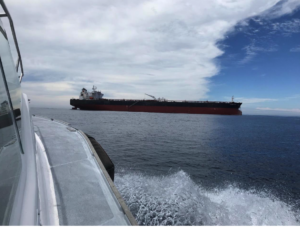 To expedite port calls more effectively, the company is also adopting new technology such as water drones to carry out underwater inspections to check the condition of hull and propellers without the use of divers. Inchcape is now the sole accredited water drone operator in Mauritius where it also specialises in bunker calls and bunker quantity surveys.

Digital ways of working have been a key factor for Inchcape personnel to co-ordinate port services amid lockdowns during the Covid-19 pandemic that also required them to keep track of constantly changing protocols and handle issues such as flight cancellations and delays in relation to crew changes.

Inchcape’s Area Manager for Mauritius and the Indian Ocean Islands cluster, Arnaud Teycheney, says the company’s business continuity plan enabled personnel to implement crew changes from their laptops, as well as expedite other tasks, without physically going onboard.

“Paradoxically, the pandemic resulted in economies due to less electricity consumption at the office and time savings as not being able to board vessels bunkering at anchorage meant we avoided a typical five-hour round-trip to each vessel – and this non-boarding protocol has been maintained by the authorities,” he says.

Inchcape’s ground-level expertise is underpinned by long-standing fruitful relationships with port stakeholders up to high management level that are invaluable in leveraging vessel clearances for smooth turnarounds.

As the company expands its offices to new African ports such as Tanga in Tanzania, it is calling on the complementary competence of its staff based in this country as well as Kenya, Mozambique, Mauritius, South Africa, Namibia, Nigeria and Ghana to extend its reach across the continent with support from regional partners.

And Richter believes sharing of expertise among Inchcape’s interconnected teams serving the continent, backed by a resourceful global network, gives it a unique strength in depth to be able to deliver the goods at African ports.