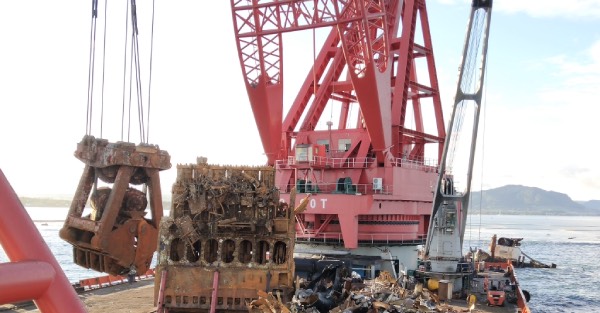 Technical operations to remove the wreck and all the associated debris from the WAKASHIO, offshore Point d’Esny, were concluded on 16 January 2022. The final actions of the wreck removal team were to recover sections of ship debris that were lying up to 500 meters away from the site of the stern section.

The whole wreck removal operation has not been without its challenges. The exposed, shallow water, high energy location was difficult for the team and the crane barge to operate at and provided numerous technical challenges. Nonetheless, the impressive and unique crane barge, the HONG BANG 6, has proven to be the right tool for the job. Once sea conditions allowed, the crane barge and its powerful grab, with a massive 5,000 ton closing force, were able to dismantle the wreck and remove the wreck piece by piece. The tenacious team of Lian Yuangang DALI have worked hard over the past four months to bring this special mission to a successful conclusion.

As the wreck was declared a total loss and the authorities in Mauritius had issued a wreck removal order, the Owners and their protection and indemnity insurer, Japan P&I, turned to specialist marine consultancy firm brand MARINE CONSULTANTS (bMC), based in Germany and operating worldwide.

In October 2020, bMC was requested by the Owners and Japan P&I to assess the available options, to carry out the difficult task of the wreck removal and give its expert opinion on the options. Following an in-depth review of all possible methods and suitable equipment, bMC was convinced that the HONG BANG 6 would prove to be the most effective tool available.

That has now been shown to be the case. The consultant bMC has remained in Mauritius since the initial incident, giving uninterrupted assistance to the Owner and insurer.

Following conclusion of the offshore recovery operation, senior bMC consultant Captain Ajay Prasad commented: “The removal of the aft section of the WAKASHIO from this location was always going to be a tough task, and it certainly proved to be so. The key for us was to identify the fastest method for the removal of WAKASHIO and we are pleased that removal works were completed safely after just 30.7 days of crane operations at the worksite. The sea conditions at the site have been difficult as expected. Added to that, the team have had to manage logistics in this remote location and considering some of the restrictions brought about by the pandemic, it’s added another layer of problems for us all to solve. But, after a huge effort by the whole team, we are there.”

The project suffered setbacks, such as delays in assets arriving work site which pushed the removal into a two-season operation. But there have been some exciting times too.

Adeline Goh, Naval Architect of bMC said: “Getting the main engine of the WAKASHIO out was a real buzz. After months of planning and countless hours of modelling and calculations, to see the 600 ton engine safely sitting on the deck of the HONG BANG 6 was a proud moment”.

The project was very well supported by local companies POLYECO, CELERO, SAMLO and IMMERSUB. What remains now is the shore side dismantling of the scrap metal at the shore base in Port Louis, to allow transportation of the metal by road to a smelting and production facility operated by SAMLO. The shore side works can be expected to take approximately another month. The impressive HONG BANG 6 will soon be a feature of the past in Mauritius waters. It shall be collected by a semi-submersible heavy lift ship in the coming days that will transport it back to China.

Captain Dennis Brand, Managing Director of brand MARINE CONSULTANTS, recently arrived in Mauritius to witness first-hand the final stages of the project. He summed up his thoughts: “I’m proud of the whole team here and I thank them for all their efforts. Lian Yuangang DALI have done a great job. So have every one of the contractors working on the project. The Mauritius people and numerous Island companies have lived and breathed this project with us. Without their support and patience, the job would not have been possible, and I am glad that things can go back to normal now.”