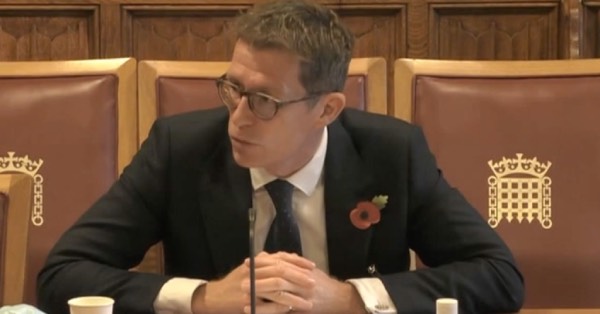 Both experts were asked questions by Peers on the effectiveness of the UN Convention on the Law of the Sea 1982 (UNCLOS) in addressing new maritime security threats, with Commander Tuckett focusing on autonomous maritime weapons and associated challenges, and Mr Murdoch addressing broader issues of maritime security, including human rights at sea.

When asked about the challenges of ensuring protection with, and monitoring of, human rights  at sea, Mr Murdoch acknowledged that “human rights at sea encompasses a very broad range of activities” from modern slavery, drug trafficking, people smuggling, crime on board ships as well as the substandard working conditions of many seafarers and fishers.

Mr Murdoch argued that UNCLOS  “does addresses human rights issues in some discreet areas” such as the obligation to rescue people in distress at sea, the duty to cooperate in the suppression of slavery and piracy and referred to human rights principles developed by tribunals in relation to use of force.

Insofar the FCDO is concerned, UNCLOS remains an effective overarching framework that has been further supplemented by more specific regulation that addresses human rights concerns.

As examples of instruments specifically developed to address human rights concerns, Mr Murdoch referred to the 2006 Maritime Labour Convention and to the 2007  ILO Work in Fishing Convention. He also stressed that the UK Government remains committed to the welfare of seafarers and fishers and is committed to uphold minimum labour and welfare standards.

The UK Government’s position is that despite contemporary human rights concerns, UNCLOS remains fit for purpose and that human rights challenges are sufficiently addressed by existing labour rights instruments, IMO guidelines, and a limited jurisprudence.

Regrettably, this has been the Government’s position for the past eight years now.

Despite criticisms that this position reflects a narrow and flawed understanding of  human rights obligations at sea, the UK Government still incorrectly equates human rights with minimum labour and welfare standards on board UK-flagged commercial shipping and fishing vessels.

This flawed perception has severe consequences for the human rights of people who found themselves at sea around the world and in the UK’s territorial waters and who are not always at sea for employment purposes but also for recreation, military, and migration purposes.

Throughout this Inquiry, experts have sought to explain to the Committee that the protection of human rights at sea cannot rest on the limited maritime jurisdictional competencies established under UNCLOS, and that something needs to be done about this.

It is hoped that both the oral and written evidence in this first House of Lords Inquiry will produce a comprehensive report that will ultimately persuade the UK Government to endorse a broader understanding of human rights at sea that goes beyond existing labour obligations in the commercial shipping and fishing industry, and encompasses all 30 fundamental human rights and freedoms as enshrined in the Universal Declaration of Human Rights 1948 for all people who find themselves living, working and transiting at sea irrespective their status, nationality, or purpose.