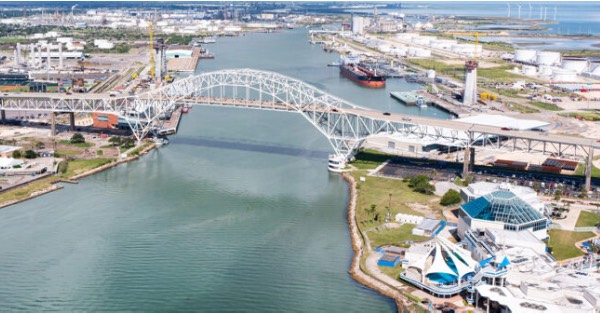 In the wake of the 26th United Nations Climate Change Conference of the Parties (COP26) in Glasgow, Scotland, the Port of Corpus Christi Authority reaffirms its commitments to leadership in atmospheric climate action and energy transition with compelling comments from Port of Corpus Christi Commission Chairman Charles W. Zahn, Jr. during the annual State of the Port event.

”Even as we embrace and expand our role in the traditional energy marketplace, we are actively working to define our niche in the transition to alternative energy sources,” said Charles W. Zahn, Jr. Chairman of the Port of Corpus Christi Commission. “Cultivating world scale production of low carbon hydrogen for export will help protect U.S. energy security, not just for the next five or 15 years, but for the next generation and beyond.”

“Being a leader is about challenging the status quo through a lens of optimism and a desire to develop better solutions, all while clearing a defensible path for others to follow,” said Sean Strawbridge, Chief Executive Officer for the Port of Corpus Christi. “The Port of Corpus Christi has long been a leader in environmental sustainability and stewardship. No single agency has, in my estimation, done more for the South Texas Coastal Bend in environmental leadership and we will continue to vigorously pursue a cleaner, more prosperous future.”

In recent months, the Port of Corpus Christi has announced several agreements as part of its focus on driving the energy transition. In February, the Port of Corpus Christi announced an MOU with the Port of Rotterdam, Europe’s leading industrial seaport. The MOU seeks, in part, to advance the development and deployment of innovative technologies related to navigational safety and environmental protection. In subsequent months, the Port of Corpus Christi announced MOUs with Stabilis Solutions Partners (LNG bunkering infrastructure) and Ares Management Corporation (solar energy/green hydrogen production), as well as with Howard Energy Partners (carbon neutral hydrogen production from waste gas feedstock), the Texas General Land Office (large-scale carbon storage) and the U.S. Department of Energy’s National Renewable Energy Laboratory (decarbonization and energy transition initiatives).