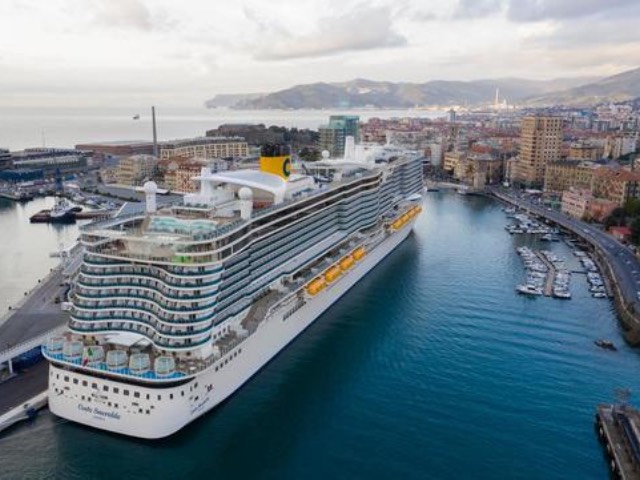 The entire final contest to proclaim the best traditional panettone will take place on board the flagship of the Italian company, where twenty pastry chefs will be evaluated by a highly qualified jury in the world of pastry. For cruise guests, there will be tastings of the special desserts made for the occasion, conferences dedicated to pastry and meetings with Master Pastry Chefs.

At its sixth edition, “Panettone senza confini” – the event dedicated to the promotion of panettone, a typical Italian cake – chose an exceptional setting to gather the most famous names of the pastry world: for the first time in its history, the event will be held on board a cruise ship: Costa Cruises’ flagship Costa Smeralda. From 13 to 20 November 2021, “Panettone senza Confini” will bring on board the best of national and international pastry art, allowing to taste the excellence of the most representative dessert in Italy: the panettone.

The focus of the event will be a contest between twenty pastry chefs, who will compete in a culinary competition on board Costa Smeralda, to determine which will be the best traditional panettone. They will be judged by a jury made up of the most renowned names in the world of pastry and panettone: Master of Masters Iginio Massari and his daughter Debora Massari, Master Pastry Chef and founder of the Iginio Massari brand; Paco Torreblanca, the Art in Pastry; Achille Zoia, Master of Doughs and “father” of modern panettone; Piergiorgio Giorilli, Master of Italian bakery and head of Ambassadeurs du Pain Italia; Vittorio Santoro, Director of Cast Alimenti; Davide Comaschi, World Chocolate Champion; Davide Malizia, World Champion of Artistic Sugar, Director of Aromacademy, and 2021 Pastry Star; Vincenzo Tiri, Master of leavened dessert, 2021 Pastry Star, and already multi-awarded for his Panettone; Riccarco Bellaera, Corporate Chef Pastry and Chef Baker of Costa Cruises, 2019 Luxury Pastry in the world, 2021 Pastry Star; Antonio Brizzi, Costa Cruises’ Corporate Executive Chef; and a French World Pastry Star, who will be announced in the coming weeks.

Ten of the twenty pastry chefs who will compete in the final contest will be invited among the participants of the previous editions, the other ten will be chosen during a selection day, in which sixty initial candidates will compete on board Costa Smeralda before the departure of the cruise.

In addition to the Master Pastry Chefs competition, “Panettone senza confini” will be an opportunity to promote and discover different varieties of panettone. Costa guests who will book a Mediterranean cruise on board Costa Smeralda from 13 to 20 November, with calls in Savona, Marseille, Barcelona, Valencia, Palermo and Civitavecchia, will have the opportunity to taste the delicacies proposed by the Master Pastry Chefs and by the challengers of the competition. Everything will be prepared with natural yeast and top- quality products without food preservatives: a real Italian excellence. It will also be possible to discover the secrets of traditional pastry preparations during a conference held by the most popular names in the world of leavened products, get to know the Masters during dedicated meetings, including one with Iginio Massari, and taste every flavor of panettone, even in the ice cream version of Eugenio Morrone, World Ice Cream Champion.

“For over 70 years, as the only cruise company to fly the Italian flag, we have been promoting Italian excellence all over the world through our cruises. This is why we are proud to bring on board one of the most important events for the world of pastry, which will allow our guests to discover the quality of the most representative dessert of our country and to meet the greatest masters of the pastry art” – says Giuseppe Carino, Vice President Guest Experience and Onboard Revenues of Costa Cruises – “All in an exceptional setting: our flagship Costa Smeralda, the symbol of Italian style”.

With over 300 competitions won and prizes received nationally and internationally, Iginio Massari is universally recognized by the world of pastry as the “Master of the Masters”. In his lab in Brescia, many great pastry chefs from all over the world have learned to manage and use natural yeast. His creations are defined by a unique style and inspiration, which has its roots firmly in the craftsmanship and combines art and science, sensitivity and great technical knowledge, mind and heart. Also thanks to his popularity with the general public, Massari has contributed to the affirmation of Italian pastry excellence in the world. An excellence that must be celebrated, shared and promoted, because pastry, as he says, is “the luxury that you can afford”.

Costa Smeralda is the Costa Cruises’ most innovative ship, a true symbol of sustainability and Made in Italy. Indeed, it is the first cruise ship of the fleet to be powered by liquefied natural gas, the most advanced propulsion technology currently available to cut emissions. The design of the interiors is a tribute to Italy and is the result of an extraordinary creative project curated by Adam D. Tihany, with the aim to enhance and bring to life the best of the country in a single location. The furnishings, lighting, fabrics and accessories are all Made in Italy and were all designed specifically for the new flagship by fifteen partners who are highly representative of Italian excellence. Italian design also plays a leading role in the CoDe, Costa Design Museum, the first museum to be built on a cruise ship. The onboard offer is perfectly integrated in an extraordinary context: from the Solemio Spa to the entertainment areas, passing through the themed bars, in collaboration with major Italian brands, and the 16 restaurants and areas dedicated to the “food experience”, including the restaurant dedicated to families with children.