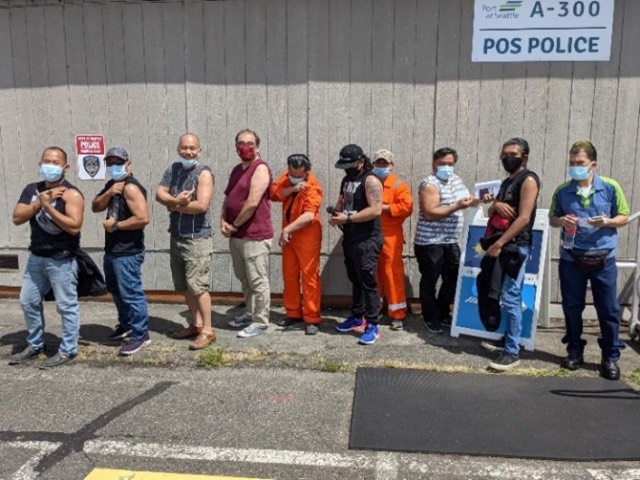 The logistics of providing vaccinations for seafarers has been one of the most highlighted industry challenges in recent months. However, key strategic ports, including Seattle, Cyprus and Singapore have begun to resolve the issue.

While land-based keyworkers and those who were designated as vulnerable were the first to be offered COVID-19 vaccinations, maritime organisations were discussing the logistical challenge of vaccinating seafarers. During ongoing discussions, seafarers were still confined to ships on extended contracts without permission to leave or visit the loved ones that they hadn’t seen in months, some even years. Once again, it seemed that the key workers who keep 90% of global trade afloat had been left behind.

As the maritime industry starts putting its vaccination plans into action, all of this is about to change.

One such example, is in Seattle, where one of our seafarer centres is based. The Port of Seattle has started offering vaccinations for both international and domestic crew, meaning currently restricted  aspects of seafaring life such as shore leave and going home to see loved ones may very well soon be a reality once more.

The opportunity to kickstart vaccinations came in April, when the Director of Strategic Operations for the NW Seaport Alliance reached out to The Revd. Cristi Chapman, Executive Director at the Seattle Seafarers Centre and Discovery Health (a local clinic specializing in maritime medical care) enquiring whether there would be an interest in partnering on the effort.

Since saying yes, over 1,200 seafarers were vaccinated at the nearby Seattle Centre before the start of July – and the port is slowly returning back to ‘normal’. In addition, Discovery Health is now vaccinating cruise ship crews as they prepare to ramp up for the start of the season.

Speaking on the combined effort, The Revd. Cristi Chapman said: “We are so grateful for the support of the Port Authority (the Northwest Seaport Alliance), Discovery Health, NAMMA and the ITF for making all of this happen.

“The centre is transporting seafarers to and from appointments when onboard vaccinations are not possible and we are also serving as one of the key conduits for information when it comes to the vaccine effort on the west coast. It is fantastic to see seafarers going back to ship feeling safer, more confident and protected.

“Furthermore, ITF has given us a small grant to hire a temporary vaccine co-ordinator this summer so we can really maximise our capacity for vaccinating as many seafarers as possible. It goes without saying it has been a very, very busy month and we look forward to continuing this positive momentum.”