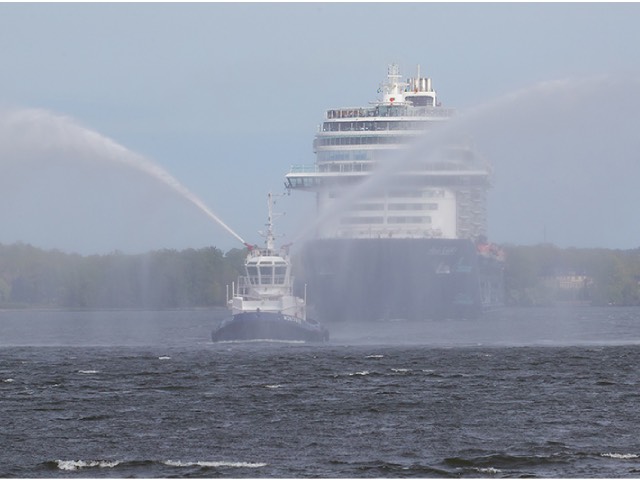 The Mein Schiff 1 cruise ship has kicked off the cruise season at Ports of Stockholm. Despite the pandemic, Stockholm is still a top choice destination as cruise organisers slowly but surely start up voyages again, not least because the ships can call at quays located in the heart of the beautiful city of Stockholm.

The first, and long-awaited, cruise ship call into Stockholm was on 25th May. The cruise ship Mein Schiff 1 arrived at a city centre quay at two o’clock on Tuesday, escorted by tugboats spraying water jets to celebrate her arrival.

The cruise type is known as a blue cruise, which means that passengers remain on the ship for the entire voyage. There were 1,125 passengers aboard, compared to the usual 3,000 of previous years. The ship also had 717 crew, which is almost a full complement. The cruise began in Kiel and will sail a round trip voyage in the Baltic Sea before returning to Germany again. There will be weekly repeat sailings of the same cruise with the same ship until midsummer.

“It is heart-warming to be slowly and carefully starting up the cruise season. Stockholm is still a very popular cruise destination and port. Ports of Stockholm, one of the world’s largest passenger ports, has been hard hit by the pandemic, but it is great to see that Stockholm is still a top choice for both tourists and shipping companies,” said Joakim Larsson, Vice Mayor of City Planning, who welcomed the ship arrival at the quayside.

The cruise shipping companies see a high demand for travel, but are very aware of the responsibility to start things up again safely. They have implemented all precautionary measures prior to and during the voyage and have close dialogue with the destinations and the relevant regulatory agencies.

The cruise companys follows the recommendations issued by the WHO (World Health Organization) and CLIA (Cruise Lines International Association – the world’s largest cruise trade association). The company has also implemented its own additional guidelines for how its cruises are carried out. The passengers must complete a health declaration form and provide proof of a negative COVID19 test before they can begin their voyage. The company has also limited the number of passengers aboard to enable social distancing and compliance with other measures.