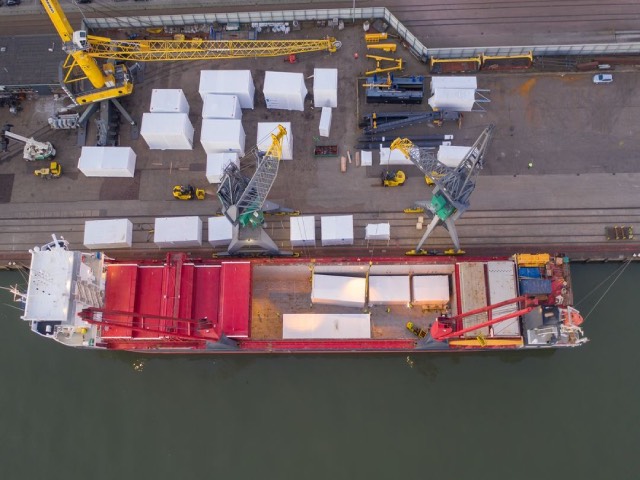 Is it possible to transport an entire bio-oil plant via a port rather than overland? It is in Rotterdam. In destination country Sweden, they are already hard at work setting up the bio-oil pyrolysis plant, which was made to order in the Netherlands. ‘Rotterdam’s break-bulk terminals offer excellent facilities for a project like this.’

When Technip Energies asked Jan Euwema, Business Development Manager at M-Star projects (Herfurth Group), to arrange the transport of a complete bio-oil pyrolysis plant from Enschede to Sweden, he knew he was taking on a challenge: ‘We had actually handled a similar operation before. This time round though, the plant consisted of various vulnerable, unpacked modules that are highly sensitive to temperature.’

Among other things, M-Star had to move a succession of gigantic modules: ‘We transported no fewer than 30 frames, many of which were over 7 metres tall, 5 metres wide and with lengths of over 20 metres and had a maximum weight of 86 tonnes. In addition, the modules had been designed to make the construction time in Sweden as short as possible. Within the frames, we had to deal with varying – and occasionally high – centres of gravity. This made transport manoeuvres even more critical, and we often had to proceed at walking pace.’

Euwema chose Rotterdam for this exacting task: ‘We wanted to transport the modules via inland shipping, since this is the most sustainable option. The port of Rotterdam offers good accessibility for inland vessels coming from Enschede. And its terminals have outstanding heavy-lift facilities.’ The company selected RHB in Waalhaven for the actual transhipment in Rotterdam. ‘Based on their professionalism and experience. We also engaged eight subcontractors for handling various links in the process.’

The plant is part of a new project of Technip Energies. Its design is based on BTG Bioliquids’ pyrolysis technology, which was developed at the University of Twente. In this process, sawdust is converted into a type of bio-oil, which can then be used to generate renewable heat, or as a base for various bio-fuels. Hans Brasker, Managing Director of Technip Benelux: ‘The heart of the new plant – the ‘Core Processing Unit’ (CPU) – is made up of 30 different modules that were manufactured and tested at Zeton in Enschede. The big advantage of this modular production and testing is that the construction time on location can be cut down to three months. And everything can be prepared beforehand in the Netherlands.’

The modules were collected in a single shipment, and successfully transported by sea-going vessel from Rotterdam to Sweden, where the bio-oil plant is currently being set up. Euwema: ‘Rotterdam is and remains an excellent port for transporting heavy-lift cargo. Considering its ambition to become the world’s most sustainable port, it would be great if in the future even more of these projects, which make a concrete contribution to the energy transition, could be moved via Rotterdam.’