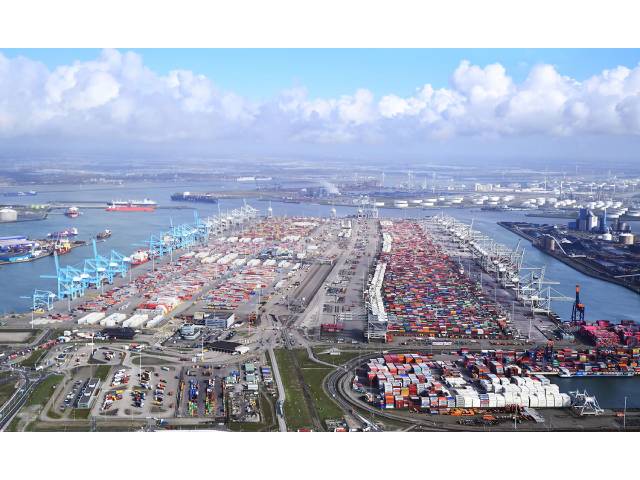 The port of Rotterdam handled a total of 103.4 million tonnes of freight in the third quarter of 2020. Total throughput over the first nine months of the year stands at 322.3 million tonnes. This is 8.8% lower than the volume recorded in the equivalent period last year. The main throughput categories to record a decline in volumes were crude oil, iron ore, coal and mineral oil products. In contrast, the port could report an increase in agribulk volumes, with only a very modest decline in container throughput.

In comparison with the second quarter of 2020, many segments showed a marked improvement in their throughput volumes. The agribulk, iron ore & scrap, biomass and roll on/roll off categories in particular could report a strong recovery at the end of the third quarter – even to pre-Covid volumes. In addition, there was a clear increase in the number of containers put through the port in Q3 compared to the preceding quarter.

Allard Castelein, CEO of the Port of Rotterdam Authority: ‘At present, it is still too early to determine whether we have left the worst behind us in economic terms. Nevertheless, I am heartened by the revival of international trade flows and the resilience of our economy – in which the rate of recovery naturally depends to an extent on further developments in the Covid-19 pandemic. Together, the Port of Rotterdam Authority, the Dutch government and companies in our port will be able to give our economy a kick-start by stepping up their joint pace of investment. This will allow us to retain jobs, create new prosperity and help build a more sustainable Netherlands.’

To recover as quickly as possible from the economic slump while simultaneously improving sustainability in the port, the Port Authority proposes accelerating a number of investment projects. This acceleration of investment projects that are intended to increase sustainable earning power – also known as the Starter Motor project – can create thousands of new structural jobs, contribute billions to the gross domestic product of the Netherlands and substantially cut the volume of carbon emissions released into the atmosphere.

Dry bulk showed an 18.6% decline compared to the first three quarters of last year. Within this segment, biomass throughput actually increased as a result of the increased firing of this product by Dutch power stations. The growing production of electric power using solar, wind and gas has contributed to a decline in the throughput of thermal coal. Falling steel production in Rotterdam’s hinterland – particularly in Germany – has also had a negative impact on the volumes of iron ore and coke put through the port. Agribulk throughput rose as a result of increased import.

The 10.4% decline in the liquid bulk segment in the first nine months of 2020 was mainly caused by the reduced uptake of crude oil by the refineries that transport this product via Rotterdam. This could mainly be attributed to the exceptionally low refining margins recorded in the past three quarters. These low refining margins were caused by the very low prices for refined oil products – specifically petrol and kerosene – which due to the Covid-19 crisis were in very poor demand in Europe over the past few months. This in turn led to a decline in the throughput of oil products as a result of decreased trade and the retention of existing stock in storage tanks.
LNG imports also declined in recent months as a result of lower import volumes caused by the extensive gas reserves currently found in Europe.
Within the other liquid bulk category, biofuels throughput increased thanks to Rotterdam’s strong position in this market. There was a modest decline in the throughput of chemical products due to the decreased import of basic feedstock.

The volume of containers handled in Rotterdam up to and including Q3 fell by 2.1% in tonnes, and 4.7% in TEU. This decline was caused by a stronger decline in the demand for new goods in Europe than in China. So far this year, the decreased import of products from Asia has been accompanied by increased export to Asia, especially meat exports, chemicals and timber. Also Rotterdam’s improved competitiveness in transshipment from Scandinavia and the Baltic to China contributed to more export volume. This means that the port of Rotterdam sends fewer empty containers back than in previous years, when import between Asia and Rotterdam consistently exceeded export. In view of the number of services that had to be cancelled and the severity of the Covid crisis, the decline in container throughput volumes can ultimately be considered quite modest.

One of the freight categories hit hardest during the first three quarters of 2020 was roll on/roll off, due to the decreased transport of people and goods to and from the United Kingdom. A very poor second quarter was followed by a strong recovery in the third quarter. This bounce-back can be explained among other things by the stocking up on supplies in Q3 in anticipation of the expiry of the Brexit transition period on 31 December 2020.

Other developments in the third quarter

World-class port infrastructure
The port of Rotterdam has the greatest number of transhipment connections with other ports worldwide. This was confirmed in a report recently published by the United Nations. The port has made considerable progress in the construction of the Container Exchange Route, which is expected to become available for operational tests with vehicles in the second quarter of 2021.

Progress in the energy transition
In the third quarter of 2020, Rotterdam once again took new steps forward when it comes to raising the sustainability of its power network. The Port of Rotterdam Authority is the first of its kind to become a member of the Hydrogen Council, a global coalition of companies that seek to stimulate the energy transition by promoting the use of hydrogen. Contractors Tennet and Van Oord are currently laying thick submarine cables that will transport power generated by offshore wind farms to shore. In due time, this power will be used to make blue hydrogen that will allow Rotterdam’s petrochemical industry to make considerable progress on its path towards zero-emissions production.

Digitalisation
The port has also made quite some headway in the field of digitalisation. Over 50 shipping companies have already adopted the navigation and planning tool Navigate, and by now, 95% of the Dutch barge and rail operators share their data directly with Navigate.
The Port of Rotterdam Authority’s former pilot project Boxinsider has been transferred to Portbase, where it has been developed further into a fully functional application that was launched under the new name Cargo Tracker. Companies can use this application to monitor the movements of import containers in Rotterdam’s port area, and are automatically notified of any delays. The launch of this new application allows Portbase to further strengthen its position as a European data platform.

A number of partners have successfully rounded off a trial with the new energy platform Distro. This platform helps companies in the port to reduce energy costs – on the one hand by taking better advantage of electric power that is generated locally, on the other by smoothing peaks in demand on the grid. This contributes to Rotterdam’s climate goal of a fully carbon-neutral port by 2050. After establishing the platform’s functionality under real-life conditions this summer, parties will be working hard in the months ahead to prepare its commercial launch.