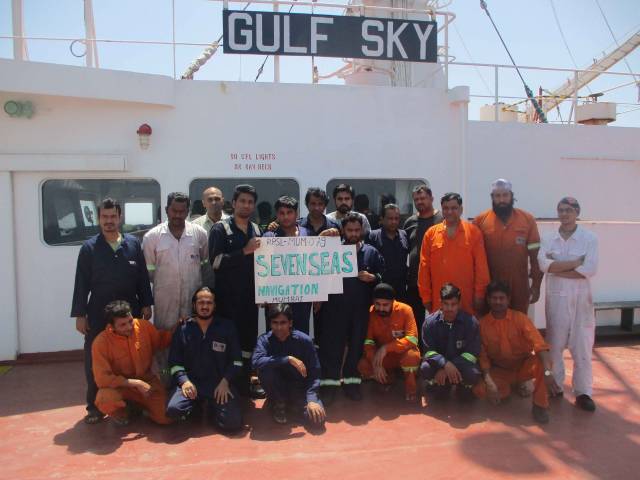 “Sir, it is very painful experience for me which [has been] never seen before in my life.”

‘The consequences of not being able to return to sea to work and earn a wage are profound on both the crew, and their families, especially during the employment difficulties of the COVID-19 pandemic.’

14 weeks after their repatriation from Tehran in mid-July following the 5th – 14thJuly hijack of their vessel while anchored off Port Khor Fakkan Anch, UAE, the 28 Indian seafarers of the MT Gulf Sky remain professionally and financially neglected, while answers do not yet appear to be coming from the Indian Director General of Shipping regarding their internal findings.

The crew’s wages remain unpaid since March 2020 totalling in excess of USD$197,000, while the crew’s Continuous Discharge Certificates (CDCs) are still retained by UAE authorities, pending an ongoing criminal investigation by government prosecutors, as notified to Human Rights at Sea.

As previously reported by Human Rights at Sea and the Commonwealth of Dominica Maritime Administration, the complex commercial and geo-political case of the MT Gulf Sky continues to be under investigation at State level as to the background to and circumstances of the hijack of the vessel from UAE waters to offshore Hormuz Island, Iran, in the space of just 24 hours.

Human Rights at Sea and the flag Administration have been jointly engaged with the correspondents for the New Zealand based Maritime Mutual Insurance Association (MMIA) Ltd, though to date, there has been no satisfactory response in terms of finalising payment of outstanding crew wages. The Commonwealth of Dominica Maritime Administration has submitted a final demand letter to MMIA, and is considering a criminal complaint.

MMIA have responded and highlighted that the P&I Club is aware that the shipowners, Taif Mining Oman, had been placed under US Office of Foreign Assets (OFAC) sanctions after the vessel was entered with the Club.

Crew employment contracts were originally entered into with the India-based company, Seven Seas Navigation India (Pvt) Ltd, though it remains unclear why the company have themselves not settled outstanding payments to the crew.

Further, the P&I Club has been advised that the vessel managers United Islands Maritime Ventures Private Ltd, based in India, had been involved in paying wages to the crew, though this also appears now to have ceased.

Fines in excess of $5,000,000 USD have now been levied against the owners of the vessel and United Islands Maritime Ventures Private, Ltd., respectively, by the flag administration.

The crew continue to submit their case to all parties who will hear them, including the Director General Shipping India, maritime unions, welfare and civil-society organisations.

To date, their collective voice has been effectively ignored.

DARSHNIK SINGH from Rudrapur, Uttarakhand stated to the Human Rights at Sea: “I and my family are facing financial problem as I have not received my wages from company Seven Seas Navigation due to which I am not able to fulfil my family needs.”

Another crew member, 3rd Engineer TANDEL SUJEETKUMAR stated: “Sir it is very painful experience for me which [has been] never seen before in my life.”

“We were arrested by Iranian hijacker from 5 July to 14 July those 10 days experience is very horrible for us because they kept us in one mesh room, we 28 people live together in that small room. That is fine ok we are released anyhow, God bless. But now we are facing very worst situation because our documents are seized by UAE government we didn’t get salary and now without documents we can’t join ship now we are in very horrible situation all authorities doesn’t help us…”

Deck cadet, BASKAR RAJA GOPAL said: “My CDC still with UAE authorities. Sir without my CDC I can’t able to join another vessel, my training period also incomplete and my family also suffering financially during this COVID-19, my family depends on me only Sir.”

The consequences of not being able to return to sea to work and earn a wage are profound on both the crew, and their families, especially during the employment difficulties of the COVID-19 pandemic.

Lack of income drains meagre personal savings resulting in crew borrowing to survive and increasing levels of debt which, if left unchecked, may well lead to indentured servitude and exploitation. This is plainly wrong and unacceptable.

Human Rights at Sea and the flag State administration remain co-joined and resolute in their efforts, alongside other stakeholders, to secure payment of the significant outstanding wages and to ensure the crew CDC’s are returned without delay.

Eric R. Dawicki, President and CEO stated, ”The Commonwealth of Dominica Maritime Administration’s Office of Maritime Affairs and Marine Personnel has been working diligently with both the United Arab Emirates Directorate of Maritime Transport Sector and The Federal Transport Authority and the Directorate General of Shipping in India to conclude the facts as we know them.  Once the Directorate General of Shipping in India submits its finding to the Tri-lateral Investigation Team Headed up by the Commonwealth of Dominica, we shall issue a statement of facts and a plan for legal actions against the perpetrators of one of the most brazen crimes on the high seas in the 21stCentury. One way or another – justice shall be served!”

David Hammond, CEO, Human Rights at Sea said, “It is undeniably frustrating to continually fail to be able to provide the crew with any credible news relating to when their outstanding wages will be paid and when their CDCs will be returned. These fundamental issues affecting livelihoods can no longer be kicked down the road. Seafarers and their families are suffering unnecessarily.”