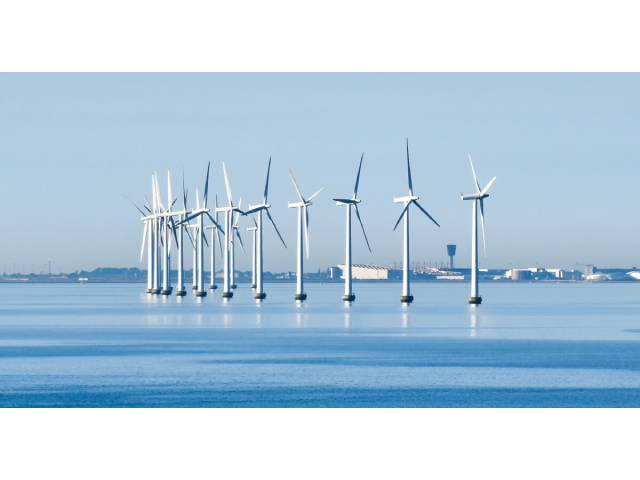 In 1912, the Danish East Asiatic Company whose ocean-going activities was bought by A.P. Møller – Maersk in 1993, had the ship MS Selandia built in Copenhagen. It was one of the world’s first ocean-going ships to be propelled by a diesel engine, a revolution at the time. On its first trip to the United Kingdom, MS Selandia was visited by the then First Lord of the Admiralty Winston Churchill, who wanted to inspect this ocean-going innovation which sailed not on coal, but on oil.

Now, more than a 100 years later, Copenhagen can once more be part of a new fuel revolution in heavy transport. Ørsted and A.P. Møller – Maersk have along with DFDS, DSV Panalpina, SAS, and Copenhagen Airports presented the vision of developing what could be one of the world’s largest facilities to produce sustainable fuels to address the main challenge of our time: climate change.

Transforming heavy transport to reach the goals of the Paris Agreement

Science is clear and tells us that we face a momentous challenge in keeping the rise in temperatures to a maximum of 1.5 degrees. A target that will limit the potentially catastrophic consequences of climate change for nature and society.

With almost 75% of all greenhouse gas emissions coming from the use of fossil fuels, it’s clear where we must focus to deliver the needed change to preserve the world, as we know it, for future generations. Heavy transport accounts for 13% of all carbon emissions, with the maritime sector representing 3 percentage points. In other words, we won’t reach the goals of the Paris Agreement, unless heavy transport is transformed. This includes the maritime sector which has a crucial role to play in creating a more sustainable future.

In Denmark, we know that this is true. The maritime sector is central to the Danish economy. But the Danish sector’s greenhouse gas emissions in international waters amount to 52.8 million tonnes CO2 also exceed the total national emissions of Denmark of 47 million tonnes. So, when the Danish government announced its bold target of a 70% greenhouse gas emission reduction by 2030 and asked 13 key industrial sectors in Denmark to contribute with solutions through the so-called climate partnerships, it was clear that the solutions in the maritime sector could have significance on global emissions at the same level of magnitude as the national emissions themselves.

The Danish Government’s Climate Partnership for the Maritime Sector concluded that the maritime sector would need to make a technological ‘quantum leap’ in developing new, sustainable fuels for the seafaring trade. At the same time, the climate partnerships for road transport and aviation also pointed to the need of developing new fuels to curb emissions, and the Climate Partnership for Energy and Utilities suggested to get started on a full industrialisation of Power-to-X-technologies in the 2020s.

The climate partnerships laid the groundwork for new collaborations across industries and that’s how the idea of a new partnership between A.P. Møller – Maersk, DFDS, DSV Panalpina, Copenhagen Airports, and SAS came to fruition and brought together leading Danish-based companies from three industries within heavy transport. The concrete vision of our partnership is to develop a new ground-breaking hydrogen and e-fuel production facility with the first phase in operation as soon as 2023. When fully scaled up by 2030, the project could deliver more than 250,000 tonnes of sustainable fuel for buses, trucks, maritime vessels, and aeroplanes every year. Production would potentially be based on a total electrolyser capacity of 1.3 gigawatts, which would likely make it one of the world’s largest facilities of its kind. The production from the fully scaled facility could reduce annual carbon emissions by 850,000 tonnes.

The very uniqueness of our partnership is that it brings together both the supply and demand sides of sustainable fuels. This is especially important because the demand and supply of sustainable fuels will have to be developed in unison. This poses a unique challenge for society, regulators, and industry. Today, such sustainable fuels come at a higher cost than the fossil-fuel alternatives. To become competitive with fossil fuels, the production of sustainable fuels will need to be matured, built at industrial scale, and go through a cost-out journey similar to what has been seen over the past decade in other renewable energy technologies, such as offshore wind, onshore wind, and solar PV. As an example, the cost of offshore wind has declined by approx. 70% in Northwest Europe since 2012.

This cost-out journey needs to be supported by concrete policy initiatives that either through subsidies or regulation make it attractive for businesses to choose sustainable fuel over fossil-based alternatives. We believe that supporting large-scale flagship projects with concrete offtake commitments – like our Copenhagen Partnership – is one of the ways to promote the use of sustainable fuels in heavy transport.

We’re confident that with the right framework in place and with strong commitments from industry, the price of renewable hydrogen can be on par with fossil-based hydrogen in 2030. In terms of sustainable fuels for the maritime sector, like methanol and ammonia, and fuels for aviation, like e-kerosene, price parity will likely depend on a reform in the way fossil fuel alternatives are priced.

The fuel market will need political action. But considering the relatively low cost to end-consumers and the increasing risk of severe impacts from climate change, it will hopefully be a politically viable path in more and more countries.

For Maersk this is one of many initiatives building a carbon neutral future, as we need more than 40 times the fuel that this project can generate why we are looking into several opportunities and to accelerate this innovation and knowledge building.

Therefore we are one of the founding partners in Maersk Mc-Kinney Moller Center for Zero Carbon Shipping which as an independent research center, will work across the entire shipping sector with industry, academia and authorities. A highly specialized, cross-disciplinary team will collaborate globally to create overviews of decarbonization pathways, accelerate the development of selected decarbonizing fuels and powering technologies, and support the establishment of regulatory, financial and commercial means to enable transformation.

We hope that our Copenhagen-based partnership can serve as an inspiration for other companies to look to the future of sustainable fuels. Just like Selandia changed global shipping with the introduction of diesel, we hope that the first zero-emission ocean-going vessel will change it again with sustainable fuels.