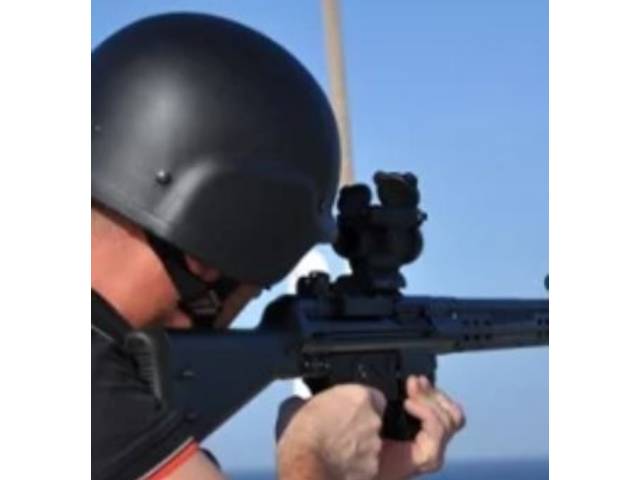 Ship operators hire armed guards to countenance the potential use of lethal force to defend a vessel in extreme and proscribed circumstances. It’s a serious business and has potentially significant consequences; however, there continues to be a trend within some quarters of the industry that devalues the importance of armed guarding through low prices and loose guidelines.

The costs of placing armed guards has risen considerably since the disruption caused by COVID-19 took effect, but this does not mask the relentless downward pressure on prices over the previous 24 months and barely alleviates the financial pressures of increased operating costs and reduced business volume induced by the pandemic. In response, this precipitated a race to the bottom price war amongst some providers looking to retain market share at all costs. To achieve rock-bottom prices compromises have been made, short-cuts taken, standards lowered, blind-eyes turned, ignorance and indifference ingrained on both sides of the supply and demand equation. However, failing to understand and assess the threat for each specific transit, ignoring and failing to interrogate financial substance, capability and operational standards of the private maritime security company (PMSC) is a dangerous game and has serious consequences.

The impact of Covid-19 on the movement of personnel between vessels and ports, the extended levels of isolation at sea, poor working conditions and financially struggling PMSC’s mean there are a number of significant factors that vessel operators need to consider. Due diligence in terms of SOLAS and financial viability are of paramount importance to safeguard cargo, crew and reputation. In light of operational difficulties an increasing number of operators are failing to carry out due diligence on the armed guards they use, opting for the cheapest options to ensure they meet the minimum requirements of their insurance providers for transits through high risk areas like the Gulf of Aden and Indian Ocean.

When it comes to hiring personnel with designated security duties including armed guards, vessel operators will invariably get the service they pay for and thus are liable for the associated heightened risks of dealing with such providers.

Vessel protection and armed guarding should be defined by the highest of standards and needs to provide vessel operators with quality assurance at its best. In a commoditising industry we aim to stand out for our refusal to cut corners.

Why is it important to complete a due diligence checklist?

For each voyage, the decision to engage a PMSC is an operational one, which should be based on a bespoke voyage-specific risk assessment. Due diligence in the selection of a private maritime security company (PMSC) is indeed able to be conducted upstream of such a requirement but should be thorough and potentially revisited in part if their engagement is deemed necessary.

In two separate incidents in July and August 2020 a Ukranian private maritime security contractor working for PMSC Alphard hijacked two vessels and their crew in a dispute over working conditions and pay.

On July 21, the Jaeger bulk carrier embarked three security guards in the Indian Ocean before sailing towards the Red Sea, a transit through the High Risk Area (HRA) that the Eagle Bulk company has completed for all transits for over ten years.

Reporting from Splash247 detailed the incident:

“Once on board, one of the guards did not surrender his weapon to the vessel’s captain as is normal protocol, and then took control of and deviated the ship from its course as he voiced his grievances and demanded compensation over late salary payments owed by his private security firm. While the guard discharged his weapon onboard the vessel, at no time did he directly threaten or harm any of the crewmembers. The remaining two guards did not participate in the action.

Eagle Bulk, in coordination with maritime security experts, worked to deescalate the situation and after approximately three days, the guard surrendered his weapon and allowed the ship to continue on its original course. Relevant authorities were kept appraised throughout the incident, and the guard was disembarked on Thursday night”. 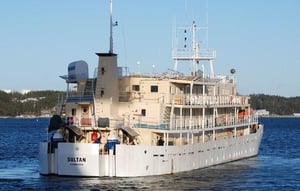 On August 21st, the same disgruntled Ukranian still working for private maritime security company Alphard, broke into the armoury onboard the Golden Palm, operated by Spain’s Palm Charters, and took the crew hostage again in his fight over back pay. The tense stand-off aboard the floating armoury in the Red Sea was resolved without incident. 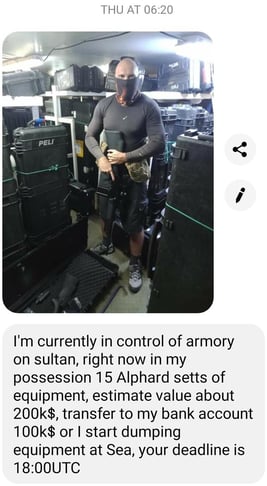 The Ukranian guard had been stuck at sea for over 5 months, without pay and with no prospect of relief. Although a grievous criminal act, the circumstances evidently drove him to desperation.

The Eagle Bulk and Golden Palm incidents aren’t isolated, they are just underreported in the public domain. What the PMSC’s are facing is a pressure cooker of factors that are putting unacceptable levels of pressure on crew and guards.

The incidents onboard the Eagle Bulk and Golden Palm shine a light on the desperate working conditions faced by some private maritime security personnel.

PMSCs continue to offer dangerously low prices for the contracting of their guard services which has a knock-on effect for its employees. Ship operators have a duty of care to ensure that the PMSC they select to contract for their transit security requirements maintains the highest standards in relation to seafarer’s welfare and industry best practice.

At Dryad Global, we act as a broker to supply embarked security teams through our product, Orion Protect. Alongside thorough and frequent due diligence checks on the PMSC’s that we contract, we also have an established and strong working relationship to ensure the correct vessel protection measure is contracted for the specific risk of the ship operators’ transit.

Our ORION PROTECT armed guard brokerage solution provides a bespoke transit risk assessment for our clients’ voyage. Specific to a transit’s route we act as brokers to supply embarked security teams. One of the companies we partner with is UK based Protection Vessels International, an established and quality assured private maritime security company.

Value does not mean low cost as we have seen in the case study and we continue to champion quality with fair pricing which is a key benefit of the relationships we hold within the brokerage service.