Despite lower demand because of the pandemic, carriers have achieved high freight rates and profitability in the first half of the year through large-scale capacity reductions and low bunker prices.

Tonnage providers have suffered the most so far, as they were left with many of the idle ships. Demand is showing signs of improvement, though, during a recession, it will be a long and drawn-out recovery.

The container shipping industry is particularly vulnerable to changes in consumer spending, which has been severely impacted by lockdowns across the world. April and May have so far proven to be the worst months for container shipping volumes, in line with when the strictest lockdowns were in place. Volumes have recovered in June and July, but they remain considerably below last year’s level. Compared with last year, the volumes for April and May were down 1.9m TEU (-13.6%) and 1.7m TEU (-11.0%) respectively. The lost volumes in June were less than half this, down 0.7m TEU (-5.1%). 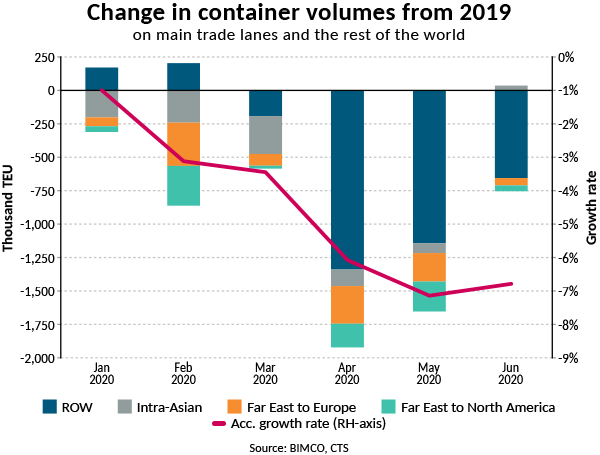 Comparing the first half of this year with last, accumulated volumes are down by 6.8%, to 78m TEU, a loss of 5.8m TEU. Volumes are down on all the major trade lanes: intra-Asia down 4.2%, Far East to Europe down 12.3% (-1m TEU), and Far East to North America down 9.0% (-0.8m TEU). All these trade lanes follow the global pattern in which volumes have recovered slightly in June, with intra-Asian volumes up compared with June last year, while the east-west trades remain below last year’s level.

Secondary trades have also had falling volumes, with intra-Europe down 2.6% and Europe to North America falling 7.0%. North America to Far East is down 3.9%.

The uptick in container volumes being shipped has led to a more-than-proportional increase in container freight rates. Originally, the collapse in volumes led to carriers blanking a large part of scheduled sailings, sending the idle container shipping fleet to record highs (2.72m TEU on 25 May), but also elevating freight rates. The recovery in volumes has resulted in most sailings being reinstated. Between mid-August and late-October, only 3% of capacity on east-west trades had been blanked (source: Sea-Intelligence, as of late August).

Despite capacity now being close to, or above, last year’s levels – and although demand remains low – container freight rates have shown remarkable resilience. As per usual, the long-term contract rates, on which most containers are shipped, have remained far more stable than their counterparts on the spot market, though they have still seen an increase.

The China Containerised Freight Index (CCFI), covering both long- and short-term contracts, rose to 905.23 on 28 August – its highest since late February. The Shanghai Container Freight Index (SCFI), which only takes spot rates into account, has shown a much more spectacular increase, rising to 1,263.26 on 28 August, its highest level since September 2012. 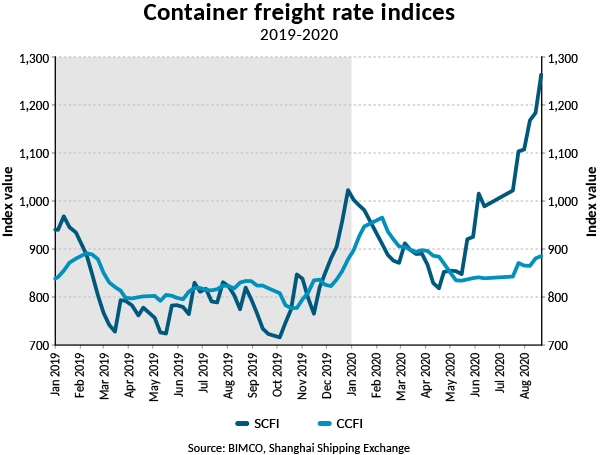 As carriers have stopped blanking sailings and reinstated capacity, the idle container shipping fleet has fallen and the activity in the charter sector has picked up – and, with the number of available ships falling, charter rates have risen. The daily hire for an 8,500 TEU ship has risen to USD 25,500 per day, having bottomed out at USD 12,000 per day at the height of the crisis. Before the pandemic, the rate was stable at USD 30,000 per day. The mid-sized ships (2,500-4,250 TEU) are the only ones experiencing higher freight rates now than at the start of the year. In particular 3,500 TEU ships have performed well recently. Charter rates for these stand at USD 12,250 per day, their highest level since July 2018.

The container shipping fleet has grown by 1.6% since the start of the year, reaching a total capacity of 23.2m TEU. BIMCO expects that, over the whole year, the fleet will expand by 2.1%, which will mark a four-year low. 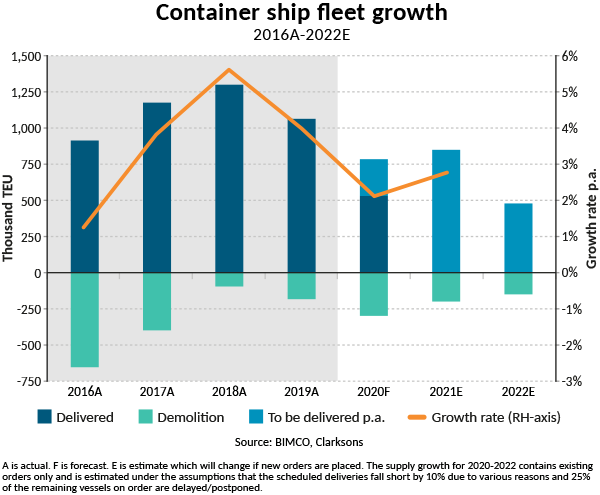 BIMCO expects a total of 300,000 TEU to be demolished this year, so far this year 169,647 TEU have been demolished. The reopening of demolition yards on the Indian subcontinent, and the poor conditions in the container shipping charter market, saw owners pushed to getting rid of some of their older and substandard ships between June and August. The youngest container ship to have been demolished this year was 15 years old.

The pandemic has also greatly dampened the appetite for new ships; in the first eight months of this year, contracting activity has been 33.5% lower than last year, as only 162,834 TEU has been ordered. This, combined with a normal pace of deliveries, has sent the container shipping orderbook to its lowest level since September 2003.

Though volumes have started to recover, actual demand for goods is still considerably down. The high rates are testament to shippers again frontloading their goods, this time ahead of a potential second wave of coronavirus around the world and resulting lockdowns. In late 2018, frontloading occurred ahead of an increase in tariffs because of the trade war. Total retail sales in the US, excluding food and beverages, are down 1.3% in the first six months of the year.

Higher unemployment and lower consumer income are looming, as governments start easing back on their stimulus measures. Even the higher state support was unable to stop consumer spending falling in the major consuming nations of the world, and, as this comes to an end, spending is likely to suffer even more, lowering demand for container shipping. The effects of this lower actual demand on container shipping will be more painful given the frontloading that we are currently seeing, which will depress volumes and freight rates in the future. In July, housing starts (private houses on which construction has begun) in the US saw a recovery from the previous months – but, at 1.406 million units, remain 4.5% below levels in February, before the pandemic. BIMCO has previously estimated that there is a 22-month time lag between housing starts and container imports in the US.

June was the first month this year in which volumes shipped on intra-Asian trades were higher than the corresponding month in 2019, up by 35,000 TEU. This by no means makes up for the lost volumes earlier in the year and, compared with the first half of 2019, volumes are still down by 890,900 TEU. Furthermore, with the new export orders index for manufacturers still contracting month on month in China in August (49.1), exports out of the region will remain muted.

The resilience in intra-Asian volumes highlights the fact that the region is becoming less dependent on exports. Exports on to the main trade lanes are experiencing double-digit declines, compared to a less than 5% drop in accumulated volumes on the intra-Asian trade in the first half of 2020. This is the result of many years with high economic activity in the region increasing the size of the middle class and, therefore, the population’s wealth and spending. 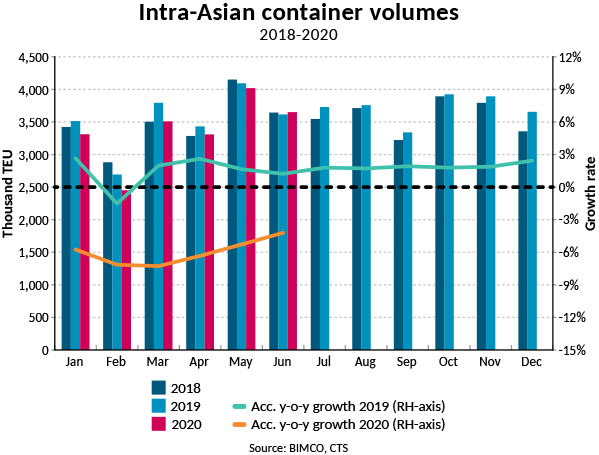 Across the board, major carriers have announced strong results for the first half of the year, despite volumes falling. This has so far been achieved by the stable freight rates and the cost savings from cheaper bunkers, blanking sailings, and returning ships to tonnage providers.

Capacity management has been the key for success. As capacity is reinstated without a permanent recovery in demand, however, carriers find themselves balancing on a thin tightrope between maintaining market share and freight rates. This while the fundamental balance in the market deteriorates as the fleet grows by 2% and demand falls. BIMCO expects freight rates to fall in the near future unless capacity adjustments are constantly made to rebalance the market.

Carriers have been, and continue to be, in a better place to face this crisis than tonnage providers, as carriers could blank sailings and, in many cases, get unwanted tonnage off their hands. Tonnage providers, on the other hand, were left with these unwanted ships, having to cover their cost and, at the height of the crisis, unable to charter them out, even at low rates.

Carriers also achieved large cost savings through the lower bunker price, which has resulted in their voyage costs falling. The price of both high-sulphur fuel oil and low-sulphur fuel oil has fallen, though – as the latter has fallen more than the former – the price spread between the two fuel types has also narrowed. This decrease in the spread has increased the payback time for a scrubber, which just less than a quarter of container ship capacity has installed. Despite the increased payback time, they still make economic sense.