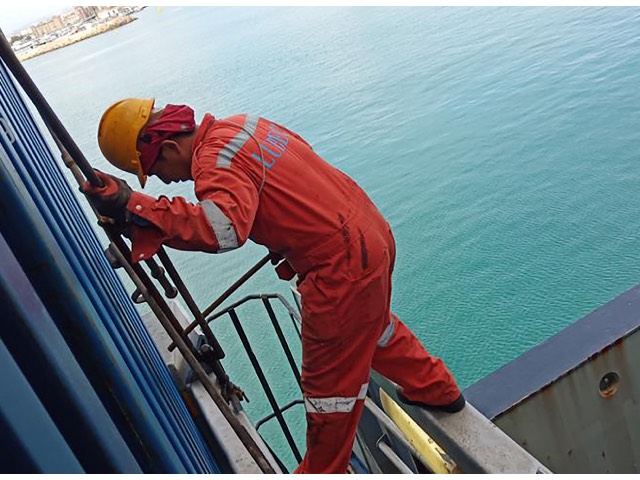 The feature ‘ITF claims shipping lines are ignoring lashing rules’ graphically highlights the danger of seafarers forced to lash mountains of containers on ships decks, while vessels are underway –  even at night, often without sleep.

The article by Nick Savvides, draws on evidence and documentation provided by the International Transport Workers’ Federation (ITF), including the plea for help.

The article features emails from a Borchard Line seafarer to the ITF, pleading for assistance.

“I almost fell,” wrote one seafarer on board. “Everything is worst right now, not a Healthy vessel for us and a dangerous ship… We want to refuse… ITF please save Us, You are Our Only Chance and Only hope.”

The call for help came before a dramatic collapse of a container stack on the Judith Borchard at sea in November last year.

Another seafarer on board North Sea Container Line’s NCL Averoy also said that crew were asked to work 180 hours or more overtime.

“Instead of resting, we do lashing and unlashing even (if) we don’t have sleep,” he wrote, naming a dozen European ports.

ITF Canada coordinator Peter Lahay said he felt compelled to write to Container News declaring, “We get dozens of letters from crew and their family complaining of fatigue and unsafe practices, but they cannot stand up and complain because they know they will be fired.”

The in-depth Container News feature also covered the lashing deaths of Ravindu Lakmal Pieris Telge, aboard the Maersk Patras on the St Lawrence River, Montreal, last year and seafarer Dennis Gomez Regana, in Dublin, aboard the Francop in November 2017.

It highlights how major container ship operators flout the regulations to cut costs.

Container News contacted both Borchard Lines and Montreal ports. Both declined to comment.

Maersk provided a contradictory statement implying sometimes ports could not provide dock workers to do the job.

Dock workers are available to lash in Montreal and are fighting to reclaim the work which the ITF argues is rightfully theirs. However, Canadian authorities previously told media the port had exemption to allow ships’ crew to lash on the river.

The feature also cites the ITF Dockers’ Clause agreed by the major lines, which came into force on 1 January 2020.