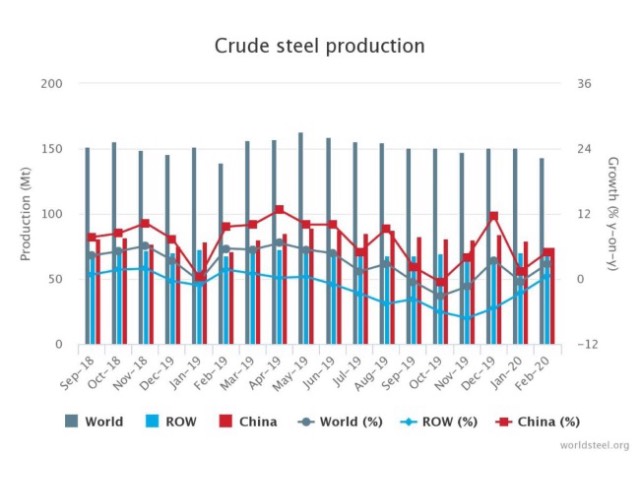 In February, world steel production was maintained at a healthy 143.3m tonnes – an increase of 2.8% year-on-year. But with the world’s top steelmakers shuttering mills in response to Covid-19, the next batch of production figures could look decidedly less robust.

Production volumes from the EU and the US were similarly positive, but as countries in the West locked down citizens and businesses in a bid to halt the spread of Covid-19, steel production has become a victim of the virus.

It will reduce production across all its European operations, has stopped its Asturias blast furnace in Spain and blast furnace number two at Taranto in Italy, and has delayed the restart of its Krakow blast furnace in Poland. Steel demand in Europe has declined, largely due to the cessation of car manufacturing throughout Europe.

The steelmaker is also idling blast furnaces in the US and Canada as the Covid-19 pandemic weakens global demand for steel. More cuts have not been ruled out as the virus spreads. ArcelorMittal produces 89.8m tonnes of crude steel and 57.1m tonnes of iron ore a year. German steelmaker ThyssenKrupp has also confirmed that it will also cut production because of the drop in demand.

In East Asia, Japan’s steel giant Nippon Steel has reorganised its production facilities, leading to the closure of some blast furnaces due to weak domestic demand. In India, one of the country’s largest steelmakers, Tata Steel is closing its downstream standalone units in Maharashtra and Uttar Pradesh. It has also made “production adjustments” at some of its European mills in the Netherlands and the UK.

And while steel production in the world’s largest producer China has not been dented by the pandemic, the continual spew of product is now far in excess of demand, flooding inventories and weighing heavy on prices. The latest data from China from its National Bureau of Statistics reveals that steel mills in China ramped up production in the first two months of 2020 in defiance of Covid-19, with an output of 154.7m, up 3.1% from the same period last year. Inventories were up 45% year-on-year by late February, according to the China Iron and Steel Association.

The fear now, as Europe’s steelmakers take pause, is that China will flood international markets with cheaper steel, feeding oversupply of steel in the market. However, those hoping for a boost in seaborne trade as a result will likely be disappointed as demand simply isn’t there for product.

The long-term impact of closing steel production facilities will likely be moderate to severe. As sector representative association UK Steel explained, primary steel production sites do not have the flexibility to “simply ‘switch off’ production without major long-term consequences”. Another hurdle in the horizon for capesize operators hoping for a fast bounce-back.

Is a briefing on Monday, International Monetary Fund managing director Kristalina Georgieva spoke of negative global growth for 2020 and a “recession at least as bad as during the global financial crisis or worse”. She did add that the IMF expected a recovery in 2021 if containment is prioritised and health systems everywhere are strengthened.

Certainly, there will be no quick fix for steel-related trades which will on recovery need to deal with the growing commodity overhang that China is creating while the West focuses on the pandemic.