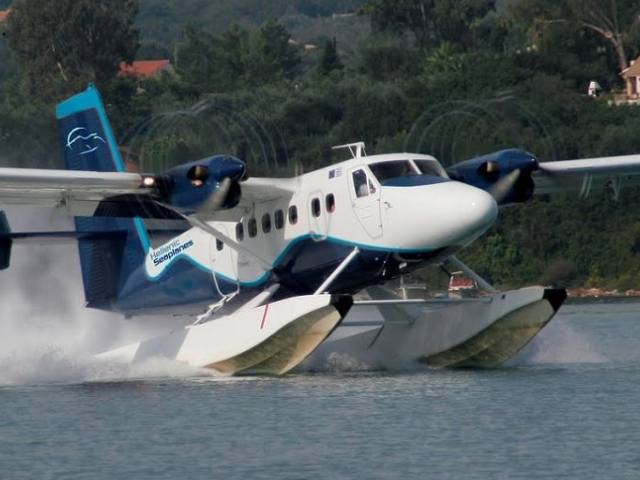 Seaplanes can integrate and support the existing maritime transport system and boost regional marinas, tourism and the local economy, according to Nicos Charalambous, Managing Director of Hellenic Seaplanes.

“There is no question of competition, but complementarity,” he explained in an interview on radio Channel 1 of Piraeus during Nikos Bardounias’ program that takes place every Friday in collaboration with maritimes.gr.

A 19-seater cannot compete with a ship carrying hundreds of passengers, products and vehicles, but it can open interconnections, he noted.

It can connect areas cut off during the winter months, such as Thessaloniki, which has no contact with the Sporades or Ikaria, Mr Charalambous said.

In collaboration with airplanes, for example, passengers from the nearby islands can be transported to Rhodes in a timely manner to catch the flight to Athens and not be weather-dependent if the ship can be anchored at the port, he explained.

The seaplane offers time saving for locals and tourists so they can see more Greece in less time, Mr Charalambous said, adding that neighboring states would also like to connect with Greece by seaplanes.

All of the problems of the previous law have been resolved and the institutional framework is ready, he added, He noted that through PPPs or pure private initiative water aerodromes could be built and breathe life even into currently non-operating marinas.

The business environment in Greece enables the deployment of 200-300 seaplanes that will give Greeks and foreigners more options and contribute to the further development of the tourist product, he explained.

Hellenic Seaplanes planned the construction and operation of private waterways in 2013, but due to an amendment brought by the previous government the plan remained in the drawer and is now coming out again.

Licensing and construction process has started for about 80 waterways and is pending for another 80, Mr Charalambous explained.

The UGS acknowledges the positive elements of the provisional agreement on the inclusion of shipping in the EU ETS and calls for the adoption...