Coming from one of its busiest periods historically, with a list of scrubber and BWMS retrofits on a waiting list, the ship repair sector is witnessing a huge shock from the spread of the COVID 19 in China. Almost all activities have frozen just a few days after the initial announcement from the Chinese government that the CNY will be postponed till February 10th. From that date till now there is a relative improvement on the work progress inside the shipyards but the main problems remain the same and the performance far behind the expected one.

The main challenges that Owners are experiencing in Chinese shipyards nowadays are delays for all kind of local products and spare parts, either from inland or overseas, which seriously affects delivery times. Repair personnel such as Owner’s representatives, service engineers and officers (i.e. commissioning engineers, specialists, flag and classification societies surveyors) either local or from overseas, are having a huge difficulty moving from their base to the vessel and vice versa. In addition to the above, shipyards are not working in full capacity yet, since workers’ “repatriation” after CNY is very time consuming given the two weeks quarantine time needed prior getting back to work. The positive speculation although, is that full harmonization will take place by mid of March. In addition, all statistics from last week show that the situation in China is now under control, with the new cases affected by the virus to be much reduced compared to the past weeks.

Outside China, there are massive bookings to shipyards in the surrounding region like Korea, Indonesia, Thailand, Philippines and Vietnam. A number of these shipyards were almost absent from the ship repair market for many years, have now revived their operations, while most of them are merely interested in opportunistic profits and not in building up long term relationships. Therefore, Owners in order to protect their interests are minimizing the repairs. Competent yards like those in Singapore were already nearly fully booked for the first half of the year before the virus appearance and therefore are unable to absorb the new wave of demand. There is also a relative increase on the workload for the rest shipyards worldwide, including shipyards in Arabian Gulf and Europe, but with few available slots still existing.

Surprisingly, there are some very few Owners, benefiting from the situation by slotting a ship for minimum scope in China during this period, ignoring the virus and getting the benefit of yards available facilities due to cancellations for simple works.

After the first half of the year, which will hopefully coincide with the time that China will get the virus eliminated, there will be another wave of ship repairs to fill again all the repair facilities. This peak is going to be even higher than the one before, considering also the massive postponements on the repairs given by flags and classification societies during the last 2 months.

Aside from the impact of the COVID 19, the “scrubber retrofit era” seems to be coming to an end with Greek Owners and big container companies planning to complete all retrofits after this summer.

Despite the fact that the dry bulk market is still looking at very low levels, last week’s positive reversal has provided much needed support to owners ‘psychology despite the extended volatility on the Capesize front. The BDI today (25/02/2020) closed at 508 points, up by 2 points compared to Monday’s (24/02/2020) levels and increased by 58 points when compared to previous Tuesday’s closing (18/02/2020). The nervousness in the tanker market was evident for yet another week, with sentiment still fragile as the coronavirus keeps spreading around the world. The BDTI today (25/02/2020) closed at 850, decreased by 21 points and the BCTI at 646, a decrease of 64 points compared to previous Tuesday’s (18/02/2020) levels.

With uncertain macroeconomic fundamentals still ruling the shipbuilding industry, it is not a surprise that recently surfacing contracting activity remains particularly soft as evidenced by the very short list below. The distinct lack of positive market drivers since the beginning of the year for both the dry bulk and tanker sector seems to have officially put a break on buyers’ appetite for newbuilding vessels. Indeed, most owners who contemplate to invest in modern tonnage at the moment, are turning to the secondhand market for further expansion of their fleet instead, which might be bad news for the newbuilding industry but not necessarily  for shipping sectors that have long struggled with oversupply of tonnage. In terms of recently reported deals, HK based owner, Valles Steamship, placed an order for one firm Aframax tanker (115,000 dwt) at Daehan, in South Korea for a price in the region of $52.0m each and delivery set in 2021.

The demolition market has seen another week of healthy activity, with competition among active cash buyers in the region allowing for steady prices and offsetting the possible downward pressure that the generous supply of demo candidates would otherwise be poised to bring about. The small positive correction Indian scrap steel prices have seen during the past days has also provided an extra layer of confidence to Alang breakers, who still offer the highest bids across the Indian subcontinent region, while if the recent improvement in the dry bulk freight market extends further, we could also see a slowdown in the number of bulkers heading for scrap in the following weeks. Average prices in the different markets this week for tankers ranged between $240-390/ldt and those for dry bulk units between $230-380/ldt.

Baltic Dry Index as of August 2 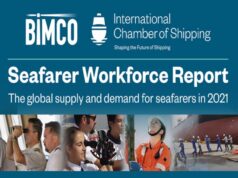