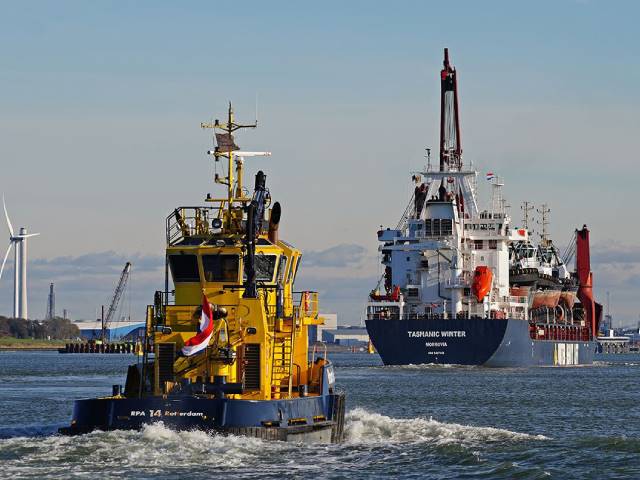 2019 was a relatively safe year for shipping in the port of Rotterdam. Over the past year, the number of sea-going vessels arriving was about the same as in 2018: 29,491 compared to 29,476 last year. The number of accidents also remained virtually the same: 113 compared to 112, which involved mainly ‘parking damage’. As there was one very serious accident, the NSI (Nautical Safety Index) – a reflection of nautical safety – was slightly below the norm (6.56 instead of 7). This was due to a collision between a RHIB and a sloop, which resulted in one fatality. Three of the four serious accidents and ten per cent of all accidents involved passenger shipping.

Harbour Master René de Vries gave his clear opinion of the prominent role passenger shipping plays in the number of incidents: “This is far too much for such a small group of waterway users. We have increased our supervision considerably, but it continues to be an extremely vulnerable group. We have, therefore, started discussions with the Ministry regarding additional measures. Something needs to happen”, stated Harbour Master De Vries today – Thursday 16 January – at his office in the World Port Center during the presentation of the nautical figures, in which he reflected on the past year and looked ahead to 2020.

For the first time and led by the ports of Rotterdam and Amsterdam, eleven sea ports have developed the same Port By-Laws. The port authorities are also cooperating in other areas. For instance, they are already using the same port management and information system: HaMIS.

The harbour master is also making preparations for the opportunities that digitisation offers the port. For instance, drones are already used during incidents, in cooperation with the Safety Region Rotterdam. New tests were also conducted using a floating lab to research what is required to enable autonomous shipping in the port.

The Port Authority is working closely with other ports including the Port of Antwerp to introduce a bunker permit for bunker fuel suppliers, starting 1 January 2021. A similar permit is already in place for LNG. The intention is for this permit to designate, for the first time, which substances are not permitted in bunkers. It is anticipated that the permit will considerably improve both transparency in the bunker market as well as bunker quantity and quality. More information will be published in mid-2020.