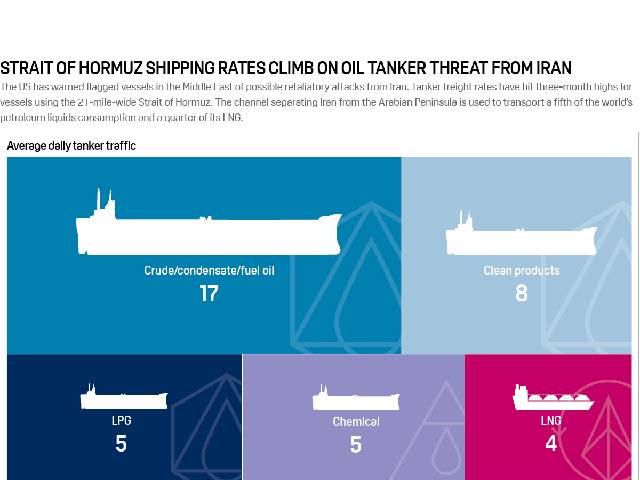 Singapore — The cost to deliver commodities is set to rise as additional war risk premia on merchant ships in the Middle East has shot up significantly this week, while security concerns are prompting some shipowners to temporarily steer clear of the Persian Gulf, market participants said Wednesday.

At least two airbases housing US troops in Iraq have been hit by more than a dozen ballistic missiles, according to the US Department of Defense. This is in response to last week’s killing of an Iranian general in Iraq by US drones.

Some of the owners are not prepared for their ships to dock at ports in the Persian Gulf, while others are adopting a “wait and watch” attitude, several sources in London, Dubai, Singapore, Seoul and Tokyo said.

A case in point is Brazil’s Petrobras, which according to brokers was planning to position its time chartered Suezmax for January 10 crude loading on the Basrah-Brazil route, industry sources said.

The headowner of the time chartered ship refused to grant Petrobras permission to dock and load this cargo, a dirty tankers’ broker in England said.

Just around 72 hours before the scheduled loading, the company has placed a 2017-built Suezmax on subjects at around $1.925 million in a spot deal, a broker in Singapore said.

Petrobras could not be immediately reached for comment, but several market participants confirmed this fixture.

The Strait of Hormuz, which leads to the Persian Gulf, is a critical choke point through which 30% of the world’s seaborne oil passes through.

Owners who are still prepared to load, bunker or transit in the Persian Gulf, are requesting charterers to bear the cost of risk.

Others are waiting to see whether the current tensions translates into an actual enhanced threat against shipping, the executive said.

According to such insurance executives worldwide, more insurers will charge ships higher premiums in the near term.

Prior to the killing of the Iranian general last week, the AWRP for a Long Range II tanker — able to transport up to 90,000 mt of cargo — with full regulatory approvals, could be equivalent to 0.3% of its intrinsic value, as stated in the insurance documents, while also factoring in depreciation.

“After the latest events, this premia will now be higher,” a clean tankers’ broker in Singapore said.

Traders and shipping industry officials are on the edge for fear the Iran-US melee may escalate into a wider conflict. If this happens, the cost of moving cargoes will rise further.

At the moment, additional premia has to be paid to the insurer by the owner, who in turn passes it on to the charterer. However, “if a full fledged war breaks out, the war risk insurance may become redundant and the owners will be fully exposed to damage,” a senior executive of a Western P&I Club said.

“During wars, at times even merchant ships are taken over by governments and the war risk insurance will no longer come into play,” the executive said.

To be sure, the insurance providers will give notice, of a reasonable time duration to the owners before the war risk cover becomes non-operative or much more expensive in a specific geographic location, he said.

Unlike piracy attacks, when state actors of sovereign countries are in direct conflict, merchant ships and commercial cargoes are infinitely more vulnerable.

This is a worst case scenario and a chartering source said that after the latest developments, only AWRP may have to be paid, but of a much higher amount.

“We are trying to figure it out,” the source said, when asked about the quantum of payment.

HOW THE PREMIA WORKS

Such premia is typically paid as an actual expense, which the owners bill to the charterer after the voyage, or transit is completed. The premia varies based on the location of the ship, its transit route, age and flag.

Freight rates move up and down, similarly the AWRP also fluctuates, based on the threat perception and depreciation of the ship’s hull and machinery. Insurers also give a discount on the premium, if the voyage, transit or berthing occurs without an actual untoward incident.

Market participants expect this expense to increase given that the threat barometer is on the rise. “The main issue here is AWRP and sometimes it can be quite high,” a source with one of the owners said.

The freight itself is not affected because the AWRP is already being billed separately to the charterers’ account, the source said. Some of the charterers insist a cap be placed on their portion of the AWRP, while the rest be paid by owners, but this is fraught with risks because in the event of an untoward incident, it can result in a very large expense, he added.

Nevertheless, the freight rates will also rise, if even a few owners categorically refuse voyage to the Persian Gulf and supply of ships tighten, market sources said.