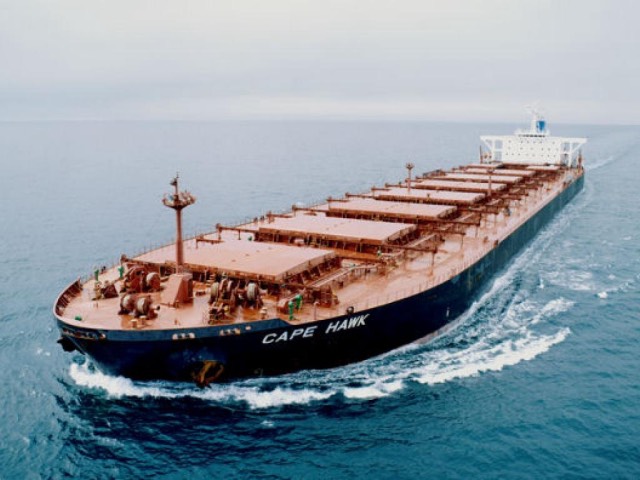 Capesize
It was one-way traffic for the Capesize market this past week, with all routes giving up value. While downward momentum may have slowed a touch by Friday, the Capesize 5TC took a trouncing, losing $5,702 to settle at an almost six-month low of $18,002. Fixing activity was solid throughout the week, especially in the Pacific as charterers took advantage of owners scrambling to fix. Some suggest this new level could bring about an increase in enquiry, as trading activity is currently thought to be healthy overall, albeit in a declining market. With the strength of the Pacific in recent weeks, imbalances in tonnage supply to the West are already being mentioned. Vessels are continuing to be heard fixing for cargoes out of Eastern Canada on fronthaul, but the tonnage in the Atlantic looks to be tightening. The Brazil to China C3 opened the week at $21.615 to close Friday at $18.96. The C5 opened at $10.295 to end the week down at $8.364.

Panamax
The firmer market continued this week, with indices rising. In the Atlantic to East Coast South America (ECSA), grain cargoes continued to push the market. Rates increased slightly on the week, with the high being $15,000 plus $500,000 ballast bonus paid for an 82,000dwt ship. Activity picked up this week around the US Gulf and coupled with an effervescent Baltic market, rates in the North Atlantic saw significant rises. We even witnessed a couple of deals with Japan delivery to cover US Gulf grain trips to the Far East, with the high being an 81,000dwt vessel achieving $14,000 retro to Japan. In Asia, it remained relatively steady and an 85,000dwt ship agreed a strong $14,500 coming from Australia for a round trip to China. A quieter week from Indonesia, but we saw an 81,000dwt vessel agree to $14,000 for the Indonesia to China coal trip. The week’s low was a 76,000dwt ship fixing at $9,000 for similar business.

Supramax/Ultramax
A mixed week for the Baltic Supramax Index (BSI) which overall remained flat. Limited period cover came to light, but a 52,000dwt ship open in the US East Coast was fixed for three to five months, trading at around $13,000. In the Atlantic, it was finely balanced from the Mediterranean – Continent region. A 63,000dwt vessel fixing a scrap run from the United Kingdom to the East Mediterranean in the mid $12,000s. ECSA saw an increase in demand, with rates improving. An Ultramax fixing a trip to the Arabian Gulf in the $14,000s, plus a low $400,000s ballast bonus. The Asian Basin became quiet as the week progressed, with a 63,000dwt ship fixing delivery for a Singapore trip via Indonesia, for redelivery to China at $11,000. A 56,000dwt vessel was also fixed from China to the Arabian Gulf in the low $6,000s. The Indian Ocean remained static, with a 55,000dwt ship fixing delivery to Mumbai via the Arabian Gulf, for redelivery to West Coast India at $9,000.

Handysize
The Baltic Handy Size Index (BHSI) raised a few points and then went flat. Not much improvement from vessels open in the Skaw-Passero range. However, ECSA and the US Gulf market climbed throughout the week. A large, Handysize vessel was clean fixed at $12,500 basis US Gulf delivery for a trip to East Mediterranean. A 37,000dwt ship, open Canakkale, was fixed for a trip via the Black Sea to the Continent at $7,500. From ECSA, similar-sized ships were fixed to West Coast South America (WCSA) ranging from the mid $15,000s, to low $17,000s. The Pacific Basin remained quiet, with minimal changes on the period front. A 36,000dwt vessel, open in the Sea of Marmara, was booked for three to five months at $10,000, with redelivery in the Atlantic.