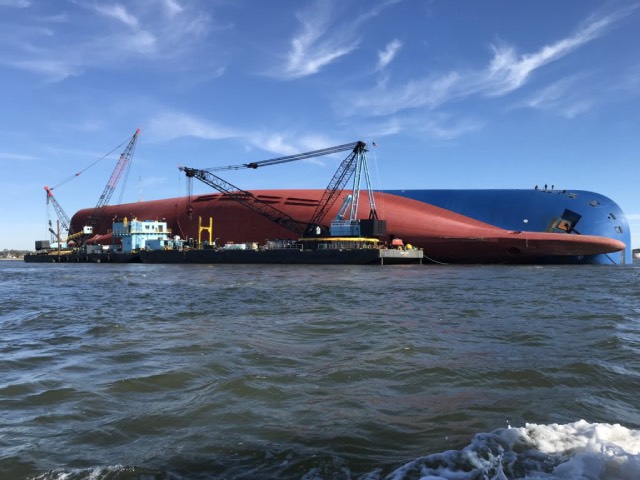 Crews onboard the work barges Farrell [left] and Columbia [right], work to clean residual fuel oil from tanks inside the M/V Golden Ray, St. Simons Sound, Dec. 3, 2019. The work barges provide a platform for personnel and equipment to perform various tasks to prepare the wreck for removal.

The St. Simons Sound Incident Response Unified Command has successfully completed the oil pumping of all accessible tanks from the M/V Golden Ray.

Salvage workers and divers gained access to 26 fuel tanks inside the Golden Ray, some of which were submerged and could only be reached by rappelling and conducting dive operations inside the wreck. Fuel was pumped from the tanks into a barge for proper disposal. The interior of the tanks were then washed with steam to remove residual fuel, which was collected and transferred into containers. More than 320,000 gallons of oil and water mixture were removed. The Unified Command continues the forensic investigation to determine an accurate volume of fuel onboard at the time of the incident and the amount discharged into the environment.

“I’d like to thank the over 500 women and men who assisted in every aspect of this successful operation,” said Chris Graff of Gallagher Marine Systems. “We’ve relied on the Brunswick community and experts around the world to reach this point and are grateful to all those who contributed”

“This milestone helps ensure the health of the environment and the livelihoods of the people who rely on the St. Simons Sound. The removal of fuel from the vessel has significantly reduced the remaining threat to the environment” said Jed Hewitt from Georgia Department of Natural Resources, Environmental Protection Division.

“The completion of the fuel removal allows the Unified Command to move on to our ultimate goal of safely removing the wreck of the Golden Ray. Removal of the vessel will be a highly complex and challenging operation,” said Commander Matt Baer, U.S. Coast Guard. “Unified Command will take every possible measure to ensure the safety of those involved in the operation, the public and the environment.”

To improve the stability of the wreck, Unified Command has begun the removal of the vessel’s propeller, propeller shaft and rudder, which weighs a total of approximately 130 tons. “Due to the vessel’s orientation on its side, these components are creating a load which the vessel was not designed to support. Imagine holding a milk jug with an outstretched arm compared to the same weight hanging at your side. Removing these components will help reduce the stresses on the hull”  said Chief Warrant Officer Jeremiah Winston, Unified Command Salvage Branch director. “This operation will help sustain the integrity of the wreck while we prepare for its full removal.”

Plans for the construction of an environmental protection barrier and the full removal of the wreck continue to be evaluated and will be made public once a selection is made.