Cyprus Shipping News
Home Environment The container terminal at the Port of Gothenburg to be fossil-free by... 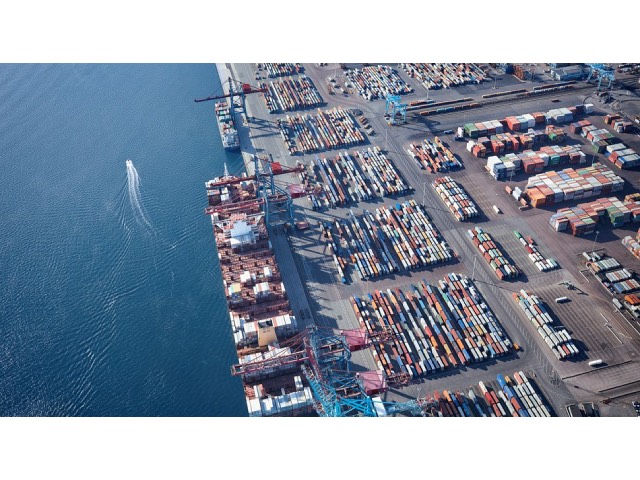 A machine park completely run on renewable fuels, a doubling of rail-borne freight and optimising of loading and discharge operations. These are parts of a new climate strategy launched by APM Terminals Gothenburg today. The strategy supports the Port of Gothenburg climate goal of reducing carbon emissions by 70% throughout the whole of the Gothenburg area by 2030.

The Port of Gothenburg is widely known as one of the most developed ports in the world regarding environment and climate issues, and it has been an early adaptor of actions for many years. Shoreside power for vessels has been available since the beginning of the 2000s, and a special port tariff discount for vessels that report a good environmental performance has been in place since 2013. Gothenburg Port Authority has been climate neutral since 2015.

“A growing number of transport purchasers are demanding a solid, assertive, and quantifiable environment and climate work, which is a fact that gives us a competitive edge over other ports. Alongside increased digitalisation and growth, we regard our environment and climate work as a key factor that will enable us to achieve our vision of becoming the world’s most competitive port,” said Elvir Dzanic, Gothenburg Port Authority chief executive.

To heighten its competitiveness even further, Gothenburg Port Authority adopted new and much more exacting environmental goals in October. Under these new goals, port-related carbon emissions will be reduced by 70 per cent by 2030. Not only within the port itself but also throughout an area extending from the outer port entrance 15 kilometres the west, right up to the city boundary.

“This is unique. There is no other port in the world that is working according to such a strict environmental target. But despite our spirit and determination, it will be difficult to realise our goals if we do not have the major players in and around the port with us all the way. We are extremely pleased with the investments that are being made by APM Terminals Gothenburg,” said Elvir Dzanic.

Entire terminal in focus
APM Terminals Gothenburg, the container terminal operator at the Port of Gothenburg, is now launching ”Green Gothenburg Gateway”, an updated strategy for reducing the climate footprint of the terminal and which will underpin the Gothenburg Port Authority environmental goals.

The terminal is aiming for a fossil-free future following a series of innovative measures, such as electrically operated cranes and gates, and terminal buildings heated by biogas. The container handling equipment, including more than 40 straddle carriers, will be powered by fossil-free fuel HVO100. All measures are to be implemented by 2020.

APM Terminals Gothenburg has already put into operation a major programme designed to optimise vessels time at berth. Although 22 per cent of vessels that call at the container terminal arrive later than agreed, ongoing optimisation of loading and discharge ensures that 97 per cent of vessels leave the quayside at the appointed time, sometimes earlier. The vessels then avoid having to increase speed to make their next scheduled port of call, which would involve using more fuel.

Large rail investments
Over the next three years, APM Terminals Gothenburg intends to double the freight volumes transported by rail. The operator has already modernised and increased the capacity of the terminal’s rail handling system.

Outside the terminal, the Gothenburg Port Authority has invested about 50 million Euros in the Railport Scandinavia network, including joint financing of the double-track expansion of the rail network leading in to the port, and two rail-connected crossdocking terminals – the Arken Combi Terminal and the soon to be opened Svea Terminal. Initiatives that will generate the potential to raise volumes.

“The Railport Scandinavia concept has allowed us to increase rail capacity and frequency significantly, but still ensure rail remains viable from an environmental point of view. The investments made by us and APM Terminals Gothenburg have resulted in rail becoming an even more attractive option. This year alone we have seen a 20 per cent rise in volumes, said Claes Sundmark, Vice President, Sales and Marketing at Gothenburg Port Authority.