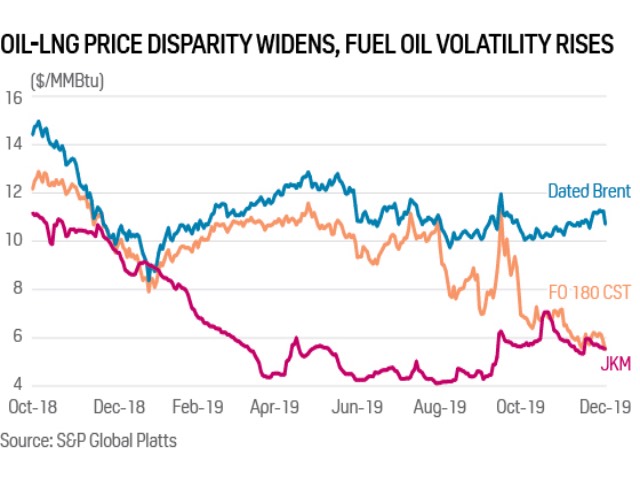 The impasse over Singapore’s piped gas import prices, largely set against fuel oil benchmarks, has taken a new turn as IMO 2020 is raising uncertainty over fuel oil prices and therefore heightening the risks faced by both gas suppliers and end users.

Singapore, where gas accounts for over 95% of electricity generation, imports more than 60% of its gas via long-term contracts from Indonesia and Malaysia, which are largely indexed against prices of high sulfur fuel oil with a maximum 180 CST viscosity. The rest, almost 40%, is imported via LNG carriers.

The sustainability of the current pricing system is under growing scrutiny, as Singapore’s exposure to global LNG spot fundamentals and prices grows, the price disparity between oil and LNG benchmarks widens, and the IMO 2020 implementation affects fuel oil availability and costs.

Pricing gas and LNG against fuel oil or oil benchmarks is not uncommon among Asia’s growing economies, particularly those that have turned to LNG imports in order to displace gasoil and fuel oil from their electricity feedstock landscape as a way of cutting electricity bills and improving air quality.

But this pattern has underestimated the inherent risk that the unpredictable disparity between oil prices and LNG market-based prices places on both buyers and sellers.

This risk is particularly high in Asia, a market that consumes around 70% of global LNG and is still dominated by long-term contracts, which increases the risk of a disparity between expected delivered prices when the contracts are signed and market-based pricing when deliveries begin.

Singapore’s monthly imports of pipeline gas from Indonesia and Malaysia averaged 524,000 mt in the first 10 months of the year, accounting for about 62% of its total gas imports, according to data from Enterprise Singapore, the national trade agency.

Piped gas is sourced from a group of gas fields about 100 km south of the intersection of Indonesia, Malaysia and Vietnam’s exclusive economic zones in the West Natuna Sea and piped through the 654 km West Natuna Transportation System to Singapore.

Further south on Indonesia’s Sumatra, the 468 km Grissik-Batam-Singapore pipeline is a second direct system that pipes natural gas to Singapore for the island’s industrial, residential and commercial use.

From gas producers in Indonesia to importers and distributors in Singapore, all have been asking the same question – where is the price of HSFO 180 CST heading?

Perhaps sensing the possible weakness in fuel oil price in the near future, buyers seem willing to continue pricing gas off the current formula, leaving sellers even more eager to find out which side is right about the price outlook.

However, significantly reduced supplies of high sulfur fuel oil from refineries globally, and the prospects that more shipowners will install scrubbers to allow ships to continue using HSFO, have fueled hopes that HSFO prices will rebound as soon as late 2020, although few expect its price to recover to pre-IMO 2020 levels.

Some market participants have thought of switching the pricing basis to crude oil, again a commodity whose fundamentals have little positive correlation with gas, giving little thought on rationality.

In August the swap crack of HSFO 180 CST against Dubai crude, a gauge of the fuel’s relative strength against crude oil, started to fluctuate wildly. This was the first direct sign on price of potential impact of IMO 2020 on the bottom of the barrel.

The trend became amplified from mid-September, and on November 29 the crack fell by an unprecedented $30/b to negative $26.25/b. Front-month Dubai swaps sat in a range of $56-66/b during the same period.

There is also significant uncertainty over the relatively thin spot liquidity of this grade. The shipping industry, which consumes most of the world’s fuel oil, has long shifted away from the 180 CST grade, which now accounts for a fraction of total bunker sales.

The main buyers of the grade from the Singapore spot market are some utilities in Northeast and Southeast Asia, which still use it to generate electricity. With sporadic spot demand, the price of the grade is more prone to wild swings than the more viscous 380 CST grade, which provides most of the liquidity in the physical fuel oil market.

Source: Platts, By Dexter Wang and edited by Jonathan Fox