Cyprus Shipping News
Home Cyprus Cocktail Reception on the occasion of Cyprus’s candidature for re-election to the... 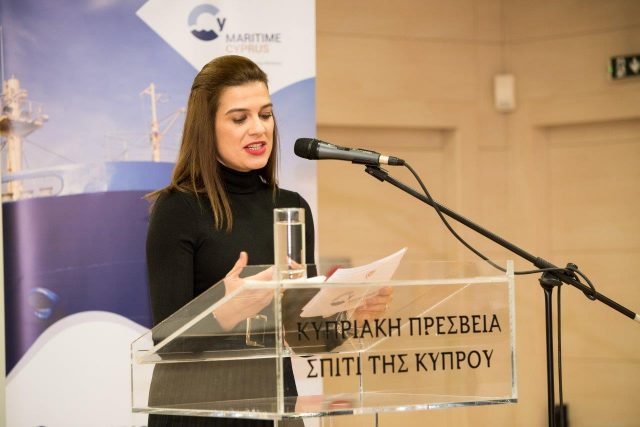 The Shipping Deputy Ministry and the Maritime Office of the Embassy of the Republic of Cyprus in Athens organised on Tuesday 22nd October 2019, at the “House of Cyprus” of the Cyprus Embassy in Athens, a cocktail reception on the occasion of Cyprus’s candidature for re-election to the Council of the International Maritime Organisation (IMO) for the period 2020 – 2021. Invitees were the Ambassadors accredited in Cyprus based in Athens.

Shipping Deputy Minister underlined the importance of shipping for Cyprus, referring to the actions that have been taken for further enhancement and support of the shipping sector in general. She mentioned that Cyprus has been an IMO Council Member since 1987 and highlighted that this reflects the effective and substantial role of Cyprus, not only within the IMO, but throughout the international shipping community. Mrs. Pilides referring to the objectives of the IMO, stressed the commitment of Cyprus to continue relying in the long-standing policy of bridging the gap between developed and developing States, Flag, Port and Coastal States, as well as achieving financial stability for IMO and its affiliated institutions.

Concluding, the Shipping Deputy Minister asked for the support of the esteemed Governments of the Member States of the Organisation for a successful re-election of Cyprus as a member of the Council of the IMO.

The elections will take place on the 29th of November 2019, in London during the 31st Session of the IMO Assembly. Cyprus seeks re-election in category “C” where 20 countries are elected, among 25 other candidate countries.