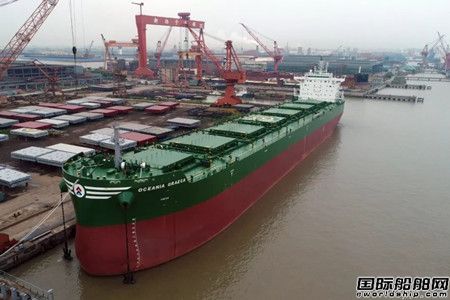 On 21st May, 19th June and 30th July 2019, Angelakos (Hellas) S.A. took delivery of three Kamsarmax newbuilding vessels on behalf of their Principals.

The ships were built by Yangzijiang Shipbuilding Group Ltd. and the delivery and naming ceremonies took place at the Jiangsu New Yangzi Shipyard in Jingjiang, China.

Magna Graecia was the first vessel to be delivered and Mrs. Caterina Carpinato, Professor of Modern Greek Language and Literature at the Ca’ Foscari University of Venice, was her Godmother.

On behalf of Angelakos (Hellas) S.A. Evangelos El. and Stephanos E. Angelakos attended the ceremony together with the Company’s site team, while the shipyard was represented by the CEO of Yiangzijiang Shipbuilding Group Ltd., Mr. Ren LeTian who was accompanied by executive members of the Builders. 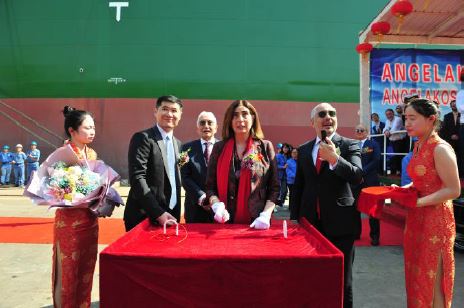 The Godmother cutting the cord of the champagne bottle

Europa Graeca was the second vessel that was delivered to her Owners. The Godmother was Mrs. Nena Galanidou, Professor of Prehistoric Archaeology at the University of Crete. The shipyard was again represented by the CEO Mr. Ren LeTian and other executives. 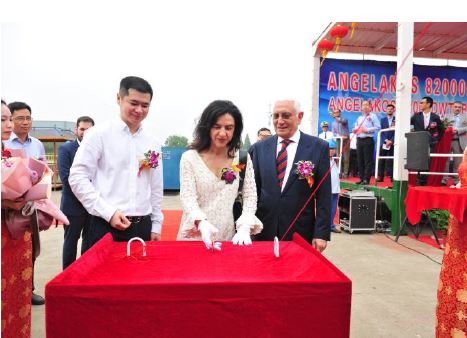 The Godmother cutting the cord of the champagne bottle

Oceania Graeca was the third ship to be delivered and she was baptised by Mrs. Natasa Pilides, the Deputy Minister of Shipping of the Republic of Cyprus, in the presence of Evangelos El. and Stephanos E. Angelakos and Mr. Ren LeTian. 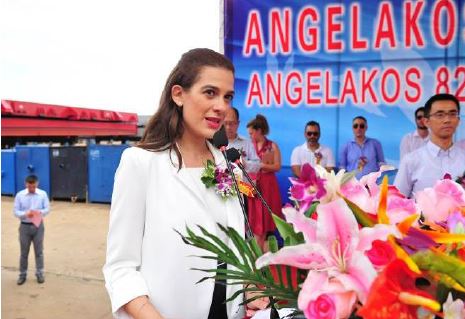 The Godmother delivering a speech at the naming ceremony.

Partners of Angelakos (Hellas) S.A. along with Lloyd’s Register representatives attended all ceremonies. At the end of each ceremony, the two companies exchanged gifts.