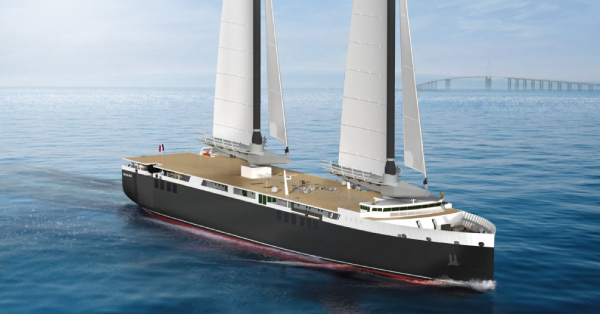 Corsica Ferries has announced on 9th january that it is investing in NEOLINE Armateur, a company that will build a 136-meter-long cargo ship powered mainly by wind to save more than 80% of fuel compared to a conventional ro-ro vessel. This is a coherent investment for the yellow ferry company, which has been committed for years to limiting its environmental impact and preserving the marine environment: eco-navigation, particle filters, lighter fuels, reduction of ship speed, optimization of crossings, protection of cetaceans, compensation for incompressible carbon emissions through reforestation in Corsica and the Amazon (Pur Projet program), etc….

With the elimination of plastic on board well before the regulations, short-distance supply, mainly from Corsica, the use of low-sulfur fuel and soon electrification on the quayside, Corsica Ferries has been committed to limiting its carbon footprint for years.

After becoming a partner in the Sunrhyse project, which produces green hydrogen that will power the fuel cells in the port of Brégaillon to connect its ships electrically to the quayside, the company has taken a new step in the process of decarbonizing maritime transport.

It announced today that it has taken a stake in NEOLINE Armateur, in order to co-finance the first NEOLINER vessel.

“After having limited our carbon footprint as much as possible, it is now essential to turn to alternatives to fossil fuels. New options are opening up today with green hydrogen and veiled propulsion. As a responsible shipowner, we have a duty to support the energy transition by backing these forward-looking solutions, which are true laboratories for the propulsion of tomorrow’s maritime transport,” said Pierre Mattei, President of Corsica Ferries, the world’s 10th largest ferry company in terms of passenger capacity.

“We are very pleased to have the support of Corsica Ferries, which has just completed the round of investment necessary to start construction of the first NEOLINER vessel, and we thank Pierre Mattei and Corsica Ferries for their confidence and commitment to reducing the impact of maritime transport. This investment by a recognized shipowner illustrates the strong interest in the use of diesel propulsion, the potential of which will be demonstrated with this first vessel,” said Jean Zanuttini, president of NEOLINE Développement.

The 136-meter long first NEOLINER cargo ship will be propelled by sail thanks to the Solid Sail rig from Chantiers de l’Atlantique, which consists of two 75-meter masts with 3,000 square meters of rigid sails. This is a major innovation, as the self-supporting and automatically controlled rig can be oriented 360°.

The largest current maritime transport project combining a loading capacity for light freight and oversized packages (up to 9.8m high) without the need for lifting, the new generation Ro-ro will offer a capacity of 1200 linear meters, 400 cars or 265 containers representing up to 5000 tons of goods.

The first transport line will connect St-Nazaire to the American East Coast (Halifax/Baltimore), passing through St-Pierre and Miquelon. With a commercial speed of 11 knots, the line, which combines energy savings and optimized transport times, has already received firm commitments from shippers such as Renault Group, Groupe Beneteau, Manitou Group, Clarins, Hennessy, Longchamp and Michelin.