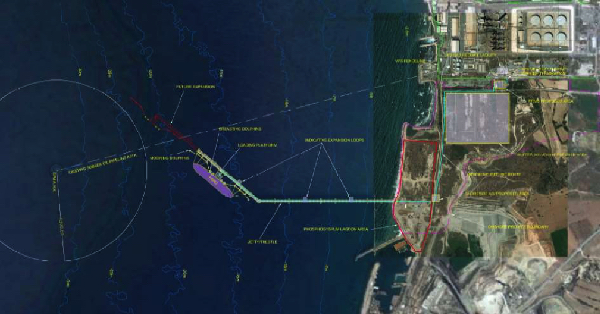 Works for the construction of a jetty for the import of Liquified Natural Gas (LNG) for electricity generation in Cyprus will begin on next week, the Cypriot authorities said on Tuesday.

The €315-million project, promoted by the state-owned Natural Gas Infrastructure Company (ETYFA) is considered as the largest energy project in Cyprus in the last years, and is expected to be completed by July 2023.

The Cyprus Joint Rescue Coordination Centre has issued a navigational telex (Navtex) notifying mariners that works in the Vasilicos area expected to begin on January 16.

According to the Navtex, as of January 16, barges and tug boats will begin marine operations for the construction of the jetty in the context of the LNG terminal.

The infrastructure project in Vasilikos, undertaken by the international consortium China Petroleum Pipeline Engineering CO LTD, Metron SA, Hudong-Zhonghua Shipbuilding and Wilhelmsen Ship Management following a tender, will include a Floating Storage Regasification Unit (FSRU), a jetty for the mooring of the FSRU, a jetty-borne gas pipeline and related infrastructure.

In a written reply to a question submitted by a Parliament member, Energy Minister Natasa Pilidou said that the initial contractual timeline for the completion of the project was set for September 2020 but the COVID-19 pandemic had put the timeframe on hold. The contractor has submitted a revised timeframe while the cost has been lifted by €25 million due to price hikes caused by the pandemic throughout the supply chain. The increased claim has been approved by the Central Committee on Changes and Claims (KEAA).

Under the new timeframe the project is expected to be completed by July 2023.

The FSRU is a converted LNG tanker, which has already been registered in the Cypriot shipping registry, is expected to reach Cyprus in the summer of 2023, provided that no new lockdowns emerge in China who is facing new COVID infections’ surge.

The project’s capital expenditure (CAPEX) are well-covered as ETYFA has already secured a €101 million grant from the European Commission through the Connecting Europe Facility (CEF), a €43m equity investment by the Electricity Authority of Cyprus (EAC) which acquired a 30% stake in ETYFA’s share capital, while the project has also secured €150 million of funding by the European Investment Bank and an additional funding of €80 million by the European Bank for Reconstruction and Development.