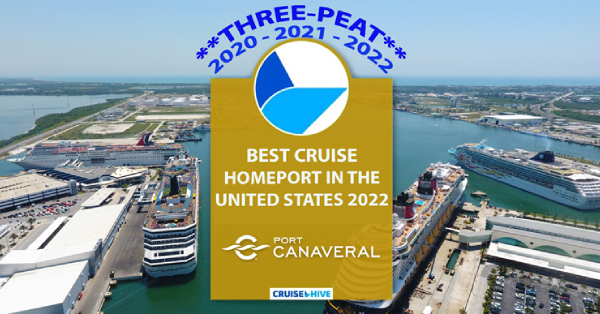 The Cruise Hive Cruise Ship Awards are an annual event recognizing the best in the industry, as voted on by Cruise Hive readers. One of the most closely contested categories is Best Homeport, which recognizes the top ports that serve as the starting point for cruise vacations.

This year, Port Canaveral came out on top, earning 24% of the votes and taking the first-place spot. It is the third year in a row that Port Canaveral has taken the top spot, followed closely by Miami and Fort Lauderdale.

“We’re thrilled to have earned this valued distinction three years in a row,” stated Capt. John Murray, Port Canaveral CEO. “What an honor for us and our cruise partners to be so well recognized for providing a high quality guest experience. It’s tremendous gratitude of our efforts from the millions of cruise guests sailing from Port Canaveral year after year.”

Port Canaveral is the Best Homeport in the United States

Located on the east coast of Florida, Port Canaveral is the second busiest cruise port in the world and is home to many of the industry’s top cruise lines, including Carnival Cruise Line, Disney Cruises, Norwegian Cruise Line, MSC Cruises, and Royal Caribbean International.

Port Canaveral offers easy access to more than 50 destinations, including the Caribbean, Bahamas, and Eastern and Western Mexico.

The easy access, short transfer from the airport, parking availability, and easy access to Orlando’s many theme parks mean that some of the millions of guests sailing from Port Canaveral each year have dubbed it the best Cruise Homeport in the Cruise Hive Ship Awards 2022.

Voting started in September 2022 on the Cruise Hive website. Readers have been able to cast a single vote in each of the seven categories. The final results do not include any repeat votes or suspicious activity.

Coming in second place with 22% of the votes was PortMiami, also known as the “Cruise Capital of the World.” Located on the southeastern tip of Florida, PortMiami is the busiest cruise port in the world.

In third place with 11% of the votes was Port Everglades, located in Fort Lauderdale, Florida. It is the third busiest cruise port in the world and is home to various cruise lines, including Carnival, Celebrity, and Royal Caribbean.

In fourth place, we find the first non-Florida port, the Port of Galveston, Texas, with 8% of the votes. Located on the Gulf of Mexico, the port is becoming increasingly popular, with more cruise lines stationing bigger and newer vessels in the last year. These include Allure of the Seas, Norwegian Prima, and from next year, Carnival Jubilee.

It’s no surprise that these four ports took the top spots in the Best Homeport category, as they are all major players in the cruise industry and offer a wide range of destinations for travelers to choose from. Together they serve more than 15 million cruise passengers each year. 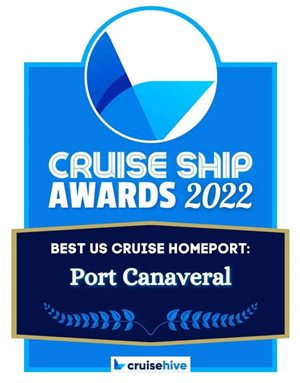 Port Canaveral might be the second biggest cruise homeport worldwide today, but it wasn’t always like that. The port began operations in 1953 as a cargo and naval port. The first cruise terminal opened in 1982.

in 2021. The $163 million terminal, berth, and 1,800-vehicle parking garage was the largest capital project in the Port’s history.Mardi GrasToday, Port Canaveral is home to six cruise terminals and was the first port in the United States to welcome and refuel the environmentally friendlier LNG-powered Excel-Class cruise ship

Carnival Cruise Line became the first cruise line to use Port Canaveral as a homeport in 1990 permanently. Disney Cruise Line followed in 1998, and Royal Caribbean in 2000.