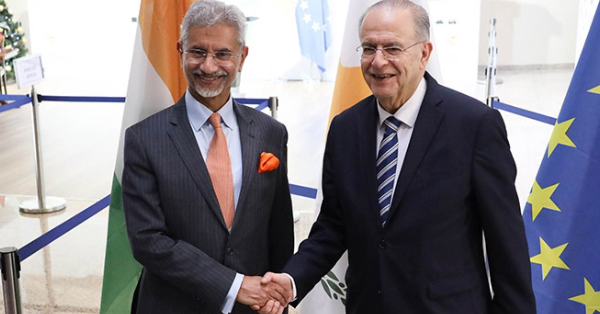 Bilateral cooperation agreements between the Republic of Cyprus and India were signed on Thursday at the Ministry of Foreign Affairs in Nicosia. Indian Foreign Affairs Minister, Dr Subrahmanyam Jaishankar, who is paying a working visit to the island, described the agreements as important while expressing his country’s commitment to a bi-communal, bi-zonal federation, based on UN resolutions.

After the signatures the Foreign Ministers of Cyprus and India made statements to the media. Kasoulides said that Cyprus and India are bound by their parallel historical experiences, such as the anti-colonial movement and the common paths to independence. “The excellent level of relations between our two countries is also anchored by our shared vision for a world of peace, freedom, democracy and the rule of law,” Kasoulides added.

He said that three important agreements were signed, with the aim to “foster our cooperation in effectively addressing issues of mutual concern”. He referred to the MoU on defense and military cooperation, which he said will help develop the relevant dialogue. In addition, he added, with the International Solar Alliance Agreement, we join a collective platform, along with a number of other countries, that aims to address an issue that affects the globe, that of the energy transition. We have also, he said, signed a Declaration of Intent on Migration and Mobility, which demonstrates our willingness to start a substantive dialogue with the aim of concluding an agreement that will tackle the issue of illegal migration and facilitate mobility in a proper manner.

He further noted that he personally expressed his heartfelt gratitude and sincere appreciation “for India’s longstanding principled stance in our continued efforts for the reunification of Cyprus, expressed by your country’s support in the UN Security Council, on the issue of Varoshia and the resolutions for the renewal of the UNFICYP’s mandate”.

He further stated that the political obstacles that emerged as a result of the partition of India stand as a historical example that serves as a guide to our efforts to reach a comprehensive settlement in Cyprus. ” As we have seen with the case of India, the country’s partition was just the beginning of a perilous journey and certainly not the end,” he said. Therefore, he added, a two-state solution cannot be accepted for Cyprus and its people.

The Cypriot Foreign Minister also stated that a number of regional issues were mentioned, such as the situation in Ukraine and Afghanistan. He concluded referring to the framework of EU-India relations, which over the years have evolved into a strategic partnership with both sides working together to address common challenges, promote peace and security.

On his part, the Minister of Foreign Affairs of India stated that their meeting demonstrates the commitment to deepen the bilateral cooperation between Cyprus and India.

The India-Cyprus partnership, he said, is of immense importance and is rooted in our shared values of democracy, diversity, pluralism and respect for law. The strategic aspects of the relationship, he said, have taken on new meaning in recent years, as reflected in our bilateral engagements. He noted that the exchange of views on the various critical challenges facing the international community today was particularly useful.

Subrahmanyam stated that the Republic of India reiterates its commitment for a bi-communal, bi-zonal federation based on UN resolutions as a solution to the Cyprus issue.

He added that they had very productive discussions on Cyprus-India bilateral relations, “on our multilateral cooperation, on geopolitical and regional challenges. So we exchanged views on our respective neighborhoods, on the Indo-Pacific, on the Middle East or West Asia as we call it, on Europe, on India-EU relations”.

Subrahmanyam emphasized that the COVID-19 pandemic and ongoing conflicts demand that we address new challenges. Energy security and food security are particularly pressing issues. As a responsible member of the international community, he said, “India has joined its other partners in working towards extending humanitarian aid, medicines, vaccines, food grains and other forms of assistance. We face these challenges today as really conscientious members of the global order and it is important that we work collectively to find common solutions,” he concluded.

Cyprus has been divided since 1974, when Turkey invaded and occupied its northern third. Repeated rounds of UN-led peace talks have so far failed to yield results. The latest round of negotiations, in July 2017 at the Swiss resort of Crans-Montana ended inconclusively.