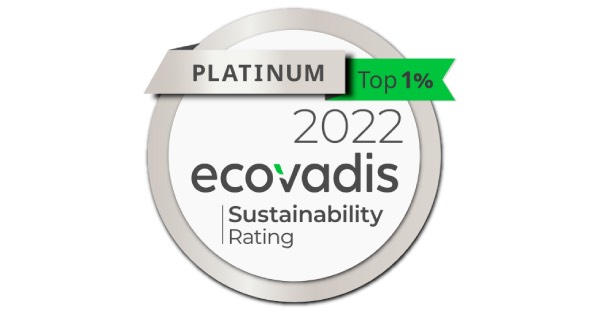 Topsoe, a global leader in carbon emission reduction technologies, received top rating for sustainability, placing us in the Top 1% of companies assessed globally. The prestigious Platinum ranking for 2022 was awarded to Topsoe by EcoVadis Ratings, the leading evidence-based assessment and rating provider for sustainability across global industries. The recognition is the result of Topsoe’s rapid transformation and delivery on its ambitious sustainability goals.

Topsoe has consistently increased its score year on year, since committing to regularly reporting through EcoVadis in 2015. Considering the time period in which the Platinum rating has been achieved, Topsoe has made rapid progress.

Roeland Baan, CEO of Topsoe, said:
“We are fully committed to reaching net zero across our value chain in 2040, and we are extremely proud to receive the Platinum rating from EcoVadis as it reflects the progress, we’ve already made on our ambitions to operate our business in the most sustainable manner. With the EcoVadis performance bar continuously raising, so do our ambitions, and that only makes us an even stronger partner for our customers.”

Another major milestone for 2022 is Topsoe’s commitment to reach net zero emissions by 2040 in line with the Science Based Target initiative (SBTi) and to achieve a 100% reduction in emissions from its own operations by 2030.

In addition, Topsoe received its first CDP rating in December. The rating B- was awarded in recognition of Topsoe’s efforts to manage its environmental impact. The rating is the result of the work that has been done in only two years, including strong collaboration between internal and external stakeholders.

Enabling the energy transition
Topsoe is committed to helping its customers reduce their emissions through decarbonization technologies to produce biofuels and low emission fuels and power. Topsoe has an ambitious 2022-target to reduce its customers greenhouse gas emissions with 16 million tonnes, and is making demonstrable progress towards meeting this goal having achieved over 15 million tonnes by November.

Today, Topsoe is already a leader in Power-to-X technology with its SOEC technology offering 30% higher efficiency than remaining technologies. In September, Topsoe took final investment decision to begin construction of its SOEC electrolyzer manufacturing plant in Herning, Denmark with a manufacturing capacity of 500 MW per year with an option to expand to 5GW. This was followed by the announcement of the first offtake agreement – with US-based First Ammonia, underlining the markets confidence in Topsoe’s highly advanced work in Power-to-X technology.