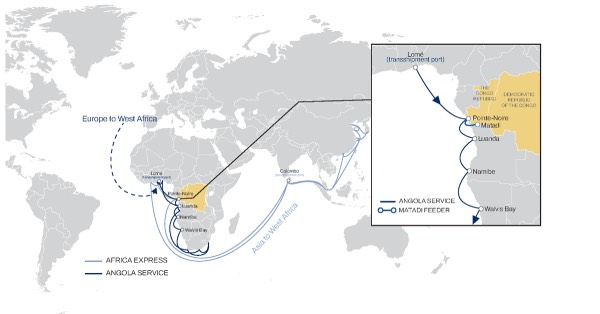 As part of MSC’s decision to expand its Sub Saharan Africa network, the company is reshuffling its Angola service, offering Pointe-Noire, Congo Republic, and Matadi, Democratic Republic of Congo, as from January 2023.

Offering Pointe-Noire on the Angola service will represent a significant advantage for Asia and India markets in the region.  The Congolese port will serve as a key transshipment hub for cargo destinated to Angola and Namibia. Stopping the tranship via Lomé will reduce by 11 days the transit time to the main Angolan port of Luanda, and Namibe, as well as Walvis Bay in Namibia.

Covering Pointe-Noire on the Angola service, also represents new business opportunities for cargo coming from North Europe and the Mediterranean. Indeed, cargo from the main cities of these markets will transship via Lomé, Togo and be directly discharged to CR and DRC.

The interconnectivity between Angola and Namibia, and its key trade markets will strengthen Intra-Africa and international trade. This will support Africa to also enhance trade networks within the continent and support local and regional economies.