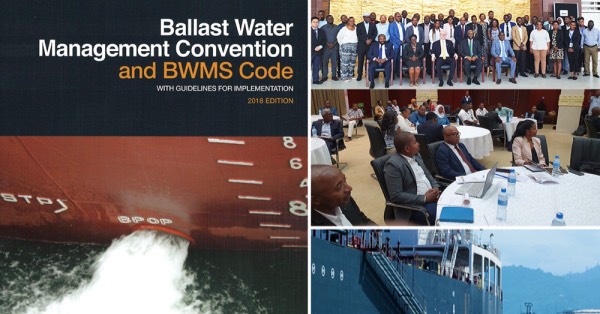 Officials from 15 countries in the Eastern and Southern Africa region have taken part in a workshop in the United Republic of Tanzania on compliance, monitoring and enforcement of the Ballast Water Management Convention (BWM Convention). The Convention is designed to protect the marine environment from the transfer of harmful aquatic organisms in ballast water carried by ships. Since it entered into force in 2017, ships must manage their ballast water so that aquatic organisms and pathogens are removed or rendered harmless before the water is released into a new location.

The workshop in Dar es Salaam (12-14 December) enabled detailed discussion about the roles and responsibilities of a flag, port and coastal State in the context of compliance with the Convention’s D-1 and D-2 two performance standards for the discharge of ballast water. It also raised awareness on the content of the Convention and relevant guidelines, and participants were given step-by-step procedures to assist their countries in the full ratification, domestication and implementation of the treaty

Hosted by the Tanzania Shipping Agencies Corporation (TASAC) with the support of the Ministry of Works and Transport, United Republic of Tanzania, the event was organized as part of IMO’s Integrated Technical Cooperation Programme (ITCP).

The countries present were: Angola, Comoros, Ethiopia, Kenya, Madagascar, Malawi, Mauritius, Mozambique, Namibia, Seychelles, Somalia, South Africa, Uganda, United Republic of Tanzania and Zambia. Of those, five have so far ratified the Convention (Kenya, Madagascar, Namibia, Seychelles and South Africa). The rest are at different stages of ratification and legislation.