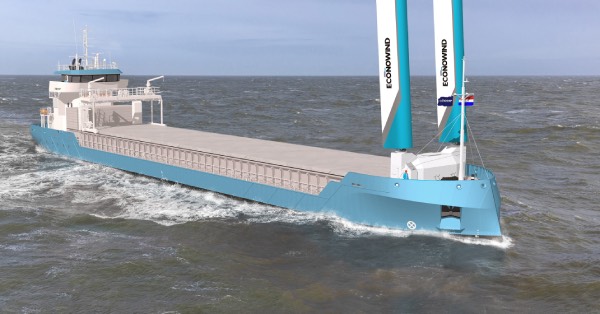 As partner of the Dutch-based Hudig & Veder Group, Hartel Shipping & Chartering, has awarded Holland Shipyards Group for the delivery of three newbuild MPP coasters of 3.800 DWT.

The new vessels, designed by Conoship, measure 89,42 m by 13,20 m and will have a cargo hold capacity of 5.530 m³ and a tween deck to allow for increased project cargo capacity.

In response to an increased focus on sustainability, Hartel Shipping has opted for a diesel-electric drivetrain, allowing for running on sustainable fuels now and later on in the future. The newbuilds are propelled by two 374 bkW electro motors and have a total installed power of 749 kW. The frequency-controlled, diesel-electric power train regulates the speed of the screw on the basis of variables such as load factor, water level and navigation route, resulting in fuel saving up to 35% and significantly fewer emissions.

Further energy savings, on this already remarkably efficient design will be realized by fitting a VentiFoil® system on the first vessel. With these sails, further efficiencies of 8% – 12% can be realized.

With these new vessels Hartel Shipping will position its fleet on the forefront of sustainability in the short-sea market. For Holland Shipyards Group, this order marks a return to the short-sea market, as well as an expansion of its sustainable efforts in other market segments than ferries, inland ships and workboats.