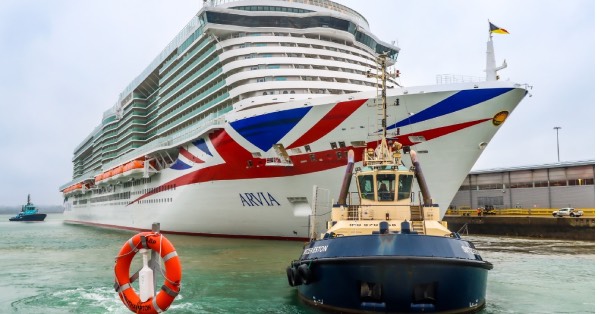 The Port of Southampton has welcomed P&O Cruises’ newest ship Arvia ahead of her plaque and key ceremony and blessing on 21 December.

As the sister ship to Iona, Arvia is an excel-class ship with capacity to carry 5,200 passengers. She will homeport in Southampton, like Iona, at the port’s Ocean Cruise Terminal which underwent a £12 million upgrade in 2018 in readiness to accommodate these next-generation larger LNG-powered ships.

The Port of Southampton, as Europe’s leading cruise turn-around port, is home to world-class cruise facilities and service providers, supporting cruise customers year-round with around 500 cruise calls annually and over 50 cruise calls a month during the peak season.

Arvia was built at the Meyer Werft shipyard in Germany and came home to the Port of Southampton on her maiden voyage on Monday 19 December.

Rebekah Keeler, Head of Cruise at Associated British Ports, said: “We are thrilled to be honouring Arvia’s arrival here at the port with a plaque and key ceremony and blessing.

“P&O Cruises ships are synonymous with the Port of Southampton and we’re delighted to be such a significant part of her journey into full service.”