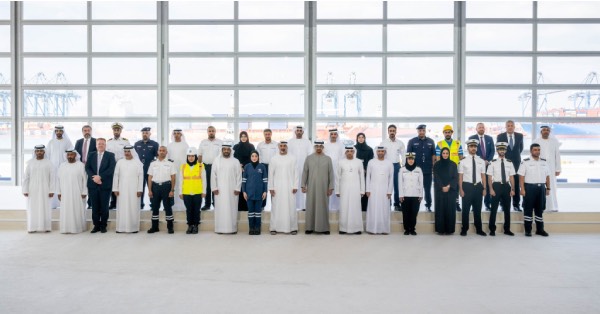 His Highness was briefed by His Excellency Falah Mohammed Al Ahbabi, Chairman of AD Ports Group, and Capt. Mohamed Juma Al Shamisi, Managing Director and Group CEO of AD Ports Group, on the key milestones of Khalifa Port expansion projects since its opening ten years ago, and reviewed future plans for the leading port in the region. His Highness also toured the new, expanded facilities and logistics available to serve import and export operations.

His Highness said: “Khalifa Port Expansion is a major national project that is considered an important addition to the UAE’s ports and logistic services and will further enhance the UAE’s position in the global trade”, adding “Khalifa Port, along other national ports, are important cornerstones to the development and diversification of the national economy”.

The official inauguration of the expansion programme by the UAE President marks another major milestone in a year that has seen AD Ports Group list on the Abu Dhabi Securities Market (ADX), open new trade corridors, complete a series of major acquisitions, rapidly transform its business and portfolio of services, and build strong relations with existing and emerging trade partners for the UAE.

As part of the expansion, which includes the development of the port’s South Quay, Khalifa Port Logistics, and Abu Dhabi Terminals at a total investment of AED 4 billion, Khalifa Port has grown from 2.43 km2 to 8.63 km2, while its quay wall has been significantly extended from 2.3 kilometres to 12.5 kilometres. It now provides 21 berths and offers a range of bespoke services for key strategic industries, positioning it among the global elite of deep-water ports, with an estimated value of AED 20.4 billion.

Officially inaugurated by the late Sheikh Khalifa on 12.12.12, Khalifa Port was developed from a stretch of reclaimed land four kilometres out to sea and is now a major hub serving more than 25 container shipping lines with direct links to more than 70 international destinations. It has been ranked in the top five of the global Container Port Performance Index (CPPI), developed by the World Bank and S&P Global Market Intelligence, and now hosts three of the world’s top four shipping operators, CSP COSCO, MSC and CMA CGM.

H.E Falah Mohammed Al Ahbabi, Chairman of AD Ports Group, said: “We are honoured to welcome His Highness Sheikh Mohamed bin Zayed Al Nahyan, President of the UAE, to inaugurate the Khalifa Port expansion, which is a vital national project to support the direction of our wise leadership to position Abu Dhabi and the UAE at the frontier of global trade.

Today, Khalifa Port is one of the most advanced deep-water ports in the world. By continuing to expand our operations internationally, we are honouring the memory of the leaders who placed us on the path to progress. We have continued to reach new heights and deliver outstanding results through our expertise and global focus.”

Capt. Mohamed Juma Al Shamisi, Managing Director and Group CEO, AD Ports Group, said: “We thank His Highness Sheikh Mohamed bin Zayed Al Nahyan, President of the UAE, for honouring us by inaugurating the Khalifa Port expansion. Everything we have achieved throughout our history has been with the support and guidance of the UAE’s leadership.

It is fitting that we are celebrating Khalifa Port’s 10th Anniversary and Zayed Port’s 50th Anniversary today in 2022, which has been a transformational year for our organisation as we expanded our international reach and strengthened our portfolio. We have grown from a local champion into a publicly listed group with an expanding global reach. We will continue to expand and invest in the future and demonstrate our capacity for excellence across international markets.”

AD Ports Group has evolved into a significant driver of economic growth, contributing AED 152.8 billion to UAE GDP, representing 13% of the UAE’s non-oil GDP and creating approximately 373,500 jobs. It continues to attract foreign direct investment through economic cities and industrial zones managed by KEZAD Group and provides a broad range of digital services to enable trade and transport.

Key achievements in 2022 include a series of transformative acquisitions, including a 70% stake in Transmar and TCI in Egypt, providing the company with a market-leading platform for operations along the entire Red Sea and beyond; an 80% equity stake in Global Feeder Shipping, contributing to its long-term strategy to become one of the world’s premier short-sea and feeder shipping players; and the acquisition of Noatum, which will enable the company to build a strong international logistics brand with deep roots in this region.

The company has also acquired companies and announced a series of joint ventures to expand its portfolio of maritime services and its global presence, such as SAFEEN Invictus, Divetech, Alligator Shipping, ASCL, and SAFEEN Surveys and Subsea Services.

In addition, AD Ports Group has significantly grown its fleet to more than 175 vessels and expanded the range of trade routes to span most of the world and provide the highest levels of connectivity between the Arabian Gulf, the Indian Ocean, the Red Sea, East Africa, and Central Asia.

The result has been a record financial performance – with revenue of AED1,466 million and net profit of AED334 million in Q3 2022 – as well as a significantly higher global profile for the company and for Abu Dhabi as a major driver of trade, industry and logistics.