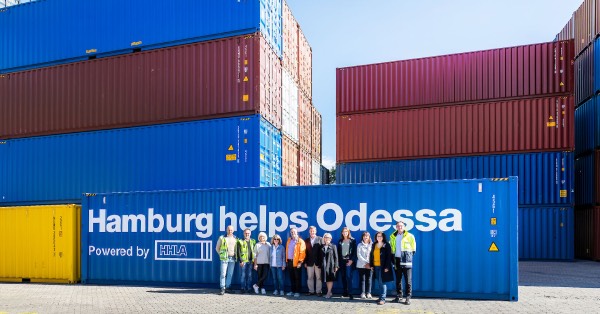 Hamburger Hafen und Logistik AG is transporting urgently needed aid supplies to Odessa by means of its own European network. On Sunday, three containers carrying medical supplies left Hamburg for the Ukrainian port city. The goods were purchased with the donations of HHLA employees and means from a company aid fund.

“HHLA continues to uphold its responsibility towards its Ukrainian employees and their families in Odessa. Furthermore, we feel an obligation to provide humanitarian aid in view of the suffering of Ukraine’s population as a result of the ongoing Russian aggression. We therefore intend to make a declaration of solidarity with the people in the Odessa region by transporting urgently needed goods. I would like to thank all the employees who contributed towards organising the transport and took part in the humanitarian campaign through their skills or donations,” said Angela Titzrath, Chairwoman of HHLA’s Executive Board, also on behalf of her Executive Board colleagues. HHLA has operated a terminal in the city on the Black Sea since 2001. However, seaborne handling at the terminal was halted in the wake of Russia’s illegal invasion of Ukraine.

As part of an internal humanitarian campaign, HHLA employees in Hamburg and at the terminal in the Italian city of Trieste donated almost 70,000 euros. HHLA’s Executive Board topped up this sum using the aid fund into which the company had deposited one million euros at the end of March. HHLA purchased goods described as urgently needed by the support staff in the Odessa region: medical supplies such as surgical gloves and dressing material, worth approximately 150,000 euros.

HHLA is organising the transport of the aid supplies from Hamburg to the Ukrainian port city through its own European network. In doing so, the company relies on the transport and logistics expertise of its employees. In addition to the interdisciplinary project team backed by consultancy subsidiary HPC, the transport of aid supplies is being supported by employees from European rail subsidiary Metrans, forwarding company CTD – which specialises in transhipments in the Port of Hamburg – and container logistics experts HCCR. Close coordination with the management of the HHLA Container Terminal Odessa (CTO) as well as the local authorities will ensure that the humanitarian aid reaches the places where it is most needed. HHLA’s procurement of the aid supplies was supported by NGO Humanitarian Logistics Organisation e.V. (HLO), who also helped with the export formalities.

Together with HLO, the Ukrainian support staff, Hafen Hilft! e.V. and Hafen Hamburg Marketing e.V., HHLA is now part of the initiative “Hafenbrücke Hamburg-Odessa” (German for port bridge Hamburg-Odessa), which aims to pool skills and resources in order to supply the people in Odessa and the surrounding areas with urgently needed supplies. As part of this relief initiative, HHLA has made its transport network in the Odessa region available for further aid deliveries.