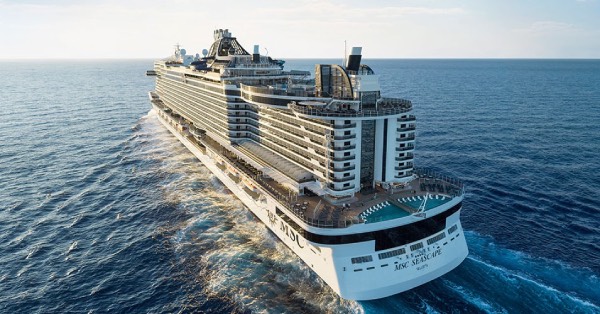 The vessel is the 21st to join the MSC Cruises fleet and MSC Seascape is the fourth to have been built by Fincantieri as part of a €7 billion investment package for 10 ships.  The shipyard will also build six new vessels for MSC’s luxury travel brand, Explora Journeys. MSC Seascape is the largest and most technologically advanced cruise ship ever built in Italy and features important innovations from an environmental perspective.

The handover ceremony, held at Fincantieri’s Monfalcone shipyard, was attended by Massimiliano Fedriga, President of the Friuli Venezia Giulia region, Anna Maria Cisint, Mayor of Monfalcone, Admiral Nicola Carlone, Commandant of the Port Authorities, Gianluigi Aponte, Founder and Chairman of the MSC Group, Pierfrancesco Vago, Executive Chairman of the MSC Group’s Cruise Division, the ship’s godmother Zoe Africa Vago, for Fincantieri General Claudio Graziano and Pierroberto Folgiero, Chairman and CEO, and Luigi Matarazzo, General Manager Merchant Ships Division, as well as representatives of the MSC newbuild team along with managers and workers from the shipyard. Paying tribute to ancient seafaring traditions, Monfalcone shipyard director Cristiano Bazzara, presented MSC Seascape’s captain, Roberto Leotta, with an ampoule containing the first water that touched the hull when the ship was floated out a year ago.

A poignant and moving tribute of remembrance was paid by all attending the ceremony to Dr. Giuseppe Bono, who for 20 years until May 2022 was CEO of Fincantieri and who passed away on 8th November. Pierfrancesco Vago announced that on MSC Seascape, which represents the last major project undertaken by Dr. Bono with MSC Cruises, a plaque named in his honour will be placed in the ship.

“The construction of MSC Seascape demonstrates, once again, the strong and lasting commitment of the MSC Group towards Italy and its manufacturing and underlines our confidence in the recovery of a country in which we have never stopped investing and believing in. MSC Seascape has required an investment of over 1 billion euros which has generated an impact on the Italian economy of almost 5 billion.  Our Group – between cruises, cargo, ferries, terminals and other activities – employs around 15,000 direct employees in Italy, generating an employment impact of a further 40,000 people,” underlined Pierfrancesco Vago, Executive Chairman of the Cruises division of the MSC Group.  Addressing the Government, he underlined that “the shipping, logistics and transport sector requires large investments and is based on multi-year spending programmes.  We therefore need political stability and a strong, authoritative and constant presence in Europe.  Italy – like France and Germany – needs to play a leading role in Europe.  Since most of the issues related to the shipping sector are now discussed and decided within the European Community”

Pierroberto Folgiero, CEO of Fincantieri, stated: “The delivery of MSC Seascape represents great importance from many points of view, first of all in the relationship with the shipowner. In fact, this ship is the seal of a hugely successful class, “Seaside”, launched over eight years ago with two new generation units, further evolved into the two “Evo”. Secondly, from a management point of view, for Fincantieri this is a result of absolute importance, achieved in full compliance with the deadlines despite the unprecedented difficulties that have characterized the global context in recent years. Finally, in terms of technological innovation, Seascape stands at the forefront in terms of environmental sustainability. By virtue of all this, we look to the future of the sector with optimism, aiming to remain a leader also thanks to a consolidated and ambitious partnership such as the one with MSC”.

MSC Seascape will begin her inaugural season in the United States, where she will be christened on 7th December in New York. She will then move to the Caribbean, offering two different weekly itineraries departing from Miami. The first, in the eastern Caribbean, will sail to Ocean Cay MSC Marine Reserve, Nassau (Bahamas), San Juan (Puerto Rico) and Puerto Plata (Dominican Republic). The second itinerary, in the western Caribbean, will call at Ocean Cay MSC Marine Reserve, Cozumel (Mexico), George Town (Cayman Islands) and Ocho Rios (Jamaica).

Latest and most advanced environmental technology

MSC Cruises has always been committed to operate some of the world’s most technologically-advanced cruise ships, and this innovation also applies to environmental performance.  With the long-term goal of achieving net-zero carbon cruising by 2050, each new MSC cruise ship represents another step towards this goal, along with other investments to help accelerate the development of next-generation environmental technologies. MSC Seascape features state-of-the-art technologies and equipment to minimise the ship’s environmental impact. This includes cutting-edge hybrid exhaust gas cleaning systems (EGCS) and selective catalytic reduction systems (SCR), achieving a 98% reduction of sulphur oxide (SOx) emissions and reducing nitrogen oxide (NOx) emissions by 90%. The wastewater treatment system is designed in line with the International Maritime Organization’s MEPC 227(64) Resolution and achieves higher purification standards than most wastewater treatment plants ashore.

MSC Seascape has been designated “Green Plus”, the highest-level additional notation in environmental sustainability issued by the RINA certification body. The notation recognises design solutions, on-board equipment and operational procedures voluntarily implemented – both during construction and during the ship’s operation – aimed at improving environmental performance beyond the minimum levels required by applicable international regulations.

MSC Seascape is the second Seaside EVO-class ship, an evolution of the pioneering Seaside class, and joins  MSC Seaside and MSC Seaview, which launched in 2017 and 2018, respectively, and sister ship MSC Seashore delivered in 2021. This class of ships is known for its innovative and glamourous design features and was conceived with the aim to take guests closer to the sea. MSC Seascape offers a range of brand-new features, venues, and experiences for guests, as 65% of the public areas have been reimagined to take the guest experience to a new level. The ship offers 13,000 square metres of outdoor space, with a wide array of outdoor bars and dining, swimming pools, and areas for relaxing and sunbathing, as well as different vantage points to take in striking views of the sea.

AIDA Heartbeat February is all about love at AIDA