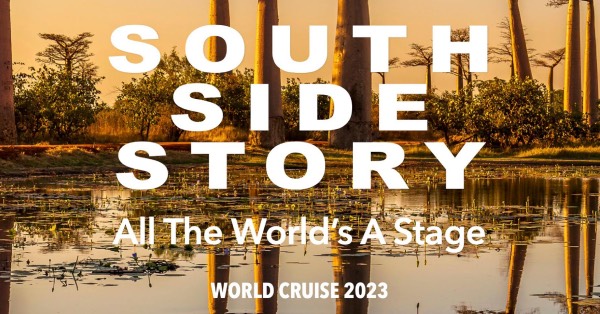 Popular among guests, Vicki Van Tassel is set to host guests as the voyage’s Cruise Director for the first time in 2023

Silversea Cruises® has named an experienced lineup of Senior Officers for its 140-day World Cruise 2023, ‘South Side Story’, which will see guests journey from Sydney to Fort Lauderdale  from January 9, 2023. Popular among the cruise line’s Venetian Society members, Vicki Van Tassel will serve as the voyage’s Cruise Director for the very first time, joining a talented group of Senior Officers aboard the 392-guest Silver Shadow℠, including Captains Michele Macarone Palmieri and Ivo Botica (switching mid-cruise), and Hotel Director Flavio Gioia.

Following the most successful pre-sale in the cruise line’s history, Silversea’s arts-inspired ‘South Side Story – All the World’s a Stage’ World Cruise 2023 sold out on the day of its general opening in March 2021. Connecting the most enriching experiences throughout the Southern Hemisphere, the voyage will see guests sail from the South Seas to the Amazon Rainforest and beyond, calling in 66 destinations in 34 countries across five continents. Charting a course through some of the world’s most captivating landscapes, each segment will unlock the history, culture, and spirit of the people and places in each. Honouring the voyage’s theme, ‘All the World’s a Stage,’ exclusive World Cruise events will highlight the sights, tastes, and rhythms of local life, shining a light on regional music, art, theatre, and dance traditions with authentic performances.

“We are delighted to name such a strong lineup of senior officers for our World Cruise 2023, ‘South Side Story – All the World’s a Stage.’ Incredibly popular among our guests, Vicki Van Tassel will ensure travellers disembark Silver Shadow having enjoyed the voyage of a lifetime, hosting guests as Cruise Director on a Silversea World Cruise for the first time,” said Roberto Martinoli, President and CEO, Silversea Cruises. “Our flagship voyage, our annual World Cruise is incredibly popular among our most loyal guests, who enjoy reuniting with close friends as they travel the world with Silversea. The record-breaking uptake on our ‘South Side Story’ World Cruise 2023 is indicative of the strong demand for extended voyages among our guests. Our next availability for a World Cruise is in 2025, aboard our beautiful Silver Dawn℠, which will see guests sail ‘controtempo’ between Tokyo and New York.”

Captain Michele Macarone Palmieri, Master
Born in Sorrento, Italy, Captain Michele Macarone Palmieri has been a valued member of the Silversea team since the cruise line’s launch in 1994. After completing his nautical studies at the Istituto Tecnico Nautico Nino Bixio in Piano di Sorrento, Macarone Palmieri developed his experience aboard cargo ships and bulk carriers, subsequently joining the cruise industry in 1987. He sailed aboard Silver Wind®on her maiden voyage in 1995 and was first appointed to the role of Master aboard Silver Cloud in 2002. The talented Captain has since taken the helm across most ships in Silversea’s fleet. Now residing in South Africa, Captain Macarone Palmieri looks forward to welcoming guests aboard Silver Shadow for the upcoming World Cruise.

Captain Ivo Botica, Master
Born in Dubrovnik, Croatia, Captain Ivo Botica is a natural-born seaman, who graduated from Dubrovnik University with qualifications in both nautical and marine engineering in 1985. Following his studies, Botica undertook an apprenticeship on container vessel, before moving into the cruise industry to develop his knowledge and broaden his experience, ascending to the role of Master for the first time in 1995 and joining Silversea Cruises in 2020. Having sailed around the world, Captain Botica names Rio de Janeiro as his favourite destination, for its unique natural beauty. Now residing in Split, Croatia, Captain Botica enjoys reading, cycling, and spending time with friends and family during his time off.

Flavio Gioia, Hotel Director
Flavio Gioia grew up in Positano on Italy’s Amalfi Coast, before moving to London where he started his career in hospitality, working at the Grosvenor House Hotel. From London, he moved to New Zealand and Australia, spending many years working in the hospitality sector. Gioia’s hotel experience, which includes 30 years in city hotels and resorts, led him to develop his career at sea from 2004, which he describes as “the final frontier in hospitality.” For this reason, Gioia is proud to be a Hotel Director with Silversea, having joined the company in 2009. Flavio, together with his professional and dedicated team, will do everything possible to ensure guests have an enjoyable and memorable World Cruise.

Vicki Van Tassel, Cruise Director
After an illustrious and extensive career in show business—spanning from Broadway, national and international tours, and television to motion capture work and stand-up comedy—Vicki Van Tassel started her career at sea with Silversea in 2011, performing as a vocalist on three World Cruises and many Grand Voyages, learning from some of the best in the business. In 2015, she joined Silversea as a Cruise Director. Since then, Van Tassel has held the position of Cruise Director on almost every ship in Silversea’s fleet, proudly opening Silver Moon℠, one of the first cruise ships in the world back in action, shortly followed by Silver Dawn. It is with the greatest sense of honour and pride that Van Tassel assumes the role of Cruise Director for the World Cruise in 2023.