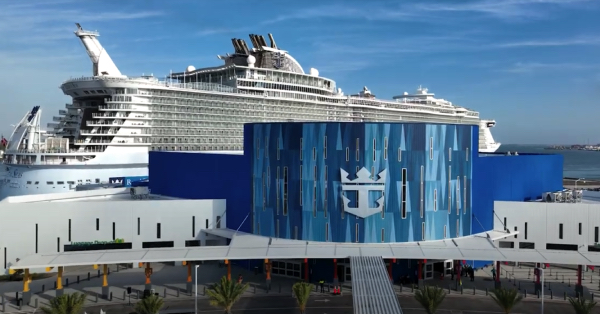 The $125 Million Terminal in Galveston, Texas, is Home to the State’s First Oasis Class Ship, Allure of the Seas

Everything’s bigger in Texas, and the biggest, boldest adventure has arrived. Today, Royal Caribbean International’s new $125 million cruise terminal in Galveston, Texas, opened its doors and welcomed the Lone Star State’s largest cruise ship, Allure of the Seas. The cruise line held a ribbon cutting ceremony at the Port of Galveston to mark the state-of-the-art facility’s opening and the Texas debut of its revolutionary Oasis Class.

Royal Caribbean executives, government and port officials and partners celebrated the milestone achievement, including U.S. representative Randy Weber, Federal Commissioner Louis Sola, Mayor Craig Brown, Royal Caribbean International President and CEO Michael Bayley and Port Director Rodger Rees. The city of Galveston also marked the day with a proclamation, recognizing the cruise line’s commitment to the city and the successful partnership started more than 20 years ago when Royal Caribbean first set sail from Galveston. With the introduction of the Oasis Class, the world’s largest cruise ships, it’s estimated the new terminal will welcome as many as 630,000 vacationers each year.

“We are thrilled to take family vacations to a whole new level in Texas. Our new, 161,334-square-foot terminal opens up a world of vacation possibilities for families in the Southwest,” said Michael Bayley, president and CEO, Royal Caribbean International. “Now our unmatched Oasis Class ships, known as the best family vacations in the industry, can set sail from Galveston. Allure of the Seas is just the beginning, and we thank the Port of Galveston, Ceres and all the teams involved for making this bold vision a reality.”

Royal Caribbean’s Galveston facility is as bold in its sustainable design as the bold adventures that vacationers have in store. The terminal will break even more new ground as the first LEED Zero Energy facility in the world, generating 100% of the energy it needs through onsite solar panels. From the start, the design strategies used to develop the terminal were aligned with parent company Royal Caribbean Group’s wholistic environmental goals, its focus to advance the development of sustainable infrastructure as well as its decarbonization strategy – Destination Net Zero.

“This new cruise terminal is a gamechanger for the port and the region,” said Rodger Rees, Port Director, Port of Galveston. “This $125 million investment, in collaboration with Royal Caribbean, the port and Ceres, is expected to bring 800 new jobs, $1.4 billion in local business services revenue, $5.6 million in state and local taxes, and incredible business development opportunities. And, of course, Allure of the Seas means more cruising adventures for our Texas cruise guests.”

Welcoming vacationers in the terminal as they make their way to Allure is a new, dynamic art sculpture named the Galveston Beach Trio by Texas-based artists Brad Oldham and Christy Coltrin of Brad Oldham Sculpture. The cruise line selected the husband-and-wife team for their one-of-a-kind concept that’s inspired by Galveston’s rich musical heritage, which includes the likes of Galveston-native and Grammy Award-winning, bass-baritone singer and songwriter Barry White. As the embodiment of the city’s island time spirit, the stainless steel and lost-wax bronze sculpture is the perfect backdrop for the start of vacationers’ getaways.

Allure will set sail from the new homeport on its first cruise on Sunday, Nov. 13 . The Oasis Class ship has in store a lineup of thrills, ways to chill, restaurants, nightlife, entertainment and more across seven signature neighborhoods, including the open-air Central Park with thousands of real plants and the Boardwalk neighborhood filled with ways to play and the one-of-a-kind AquaTheater entertainment venue that comes alive with high divers, acrobats, aerialists and more. From a nine-story-high zip line and two FlowRider surf simulators to rock climbing, ice skating, and original productions that span four stages – air, ice, water and theater – there’s adventure from end to end.

When it comes to refueling in between the action, the 30-plus restaurants, bars and lounges on board serve up a range of flavors like family-style Italian classics at Giovanni’s Table, American steakhouse favorites at Chops Grille and fresh sushi and sizzling hibachi at Izumi. New concepts and dishes are coming to Allure as well, including Wipeout Cafe featuring El Loco Fresh. Fitting for the ship’s new home in Texas, the venue will serve up El Loco Fresh’s popular, grab-and-go Mexican delights like made-to-order quesadillas, tacos, nachos and more. Plus, joining the staples guests know and love at Giovanni’s Table will be menu items such as crispy calamari, eggplant parmigiana and caprese salad. Every member of the family can make memories together and on their own adventures any day of the week on Allure.