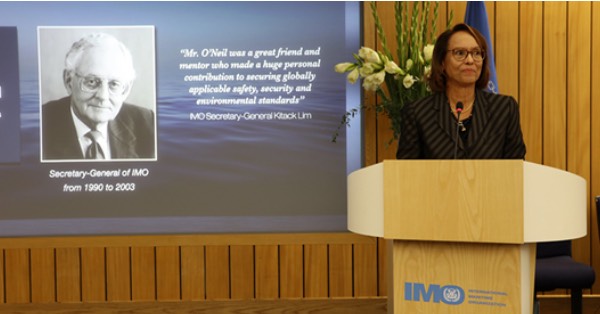 Mr. Lim welcomed those attending the 2022 IMO Awards Ceremony, the first time since before the COVID-19 pandemic that the Awards have been held in-person. Addressing the audience, which included Mr. O’Neil’s widow,  Mr. Lim said Mr. O’Neil had made “a huge personal contribution to securing globally applicable safety, security and environmental standards,” during his 14 years as IMO Secretary-General.

Describing him as “a great friend to the Organization and to all of us, the Secretary-General went on to detail the “lasting legacy” Mr. O’Neil left on the Organization through his commitment to the universality of IMO, and the significant increase in membership that he oversaw. “He encouraged wide and effective participation in the Organization from all stakeholders in the maritime sector”, Mr. Lim said.

Mr. O’Neil’s support for developing States, his persistence in searching for new sources of funding and his tireless work to strengthen the relevance and capacity of IMO’s educational institutes, the World Maritime University and the IMO International Maritime Law Institute were highlighted. Mr. Lim also cited the many new treaties adopted during Mr. O’Neil’s tenure, and his work to tackle contemporary issues, from maritime security after the September 2001 attacks to the management of ballast water to prevent the spread of invasive aquatic species.

The Secretary-General spoke of Mr. O’Neil’s drive to address fundamental safety issues, reminding the audience that he had personally acted to urge the IMO membership to address key safety concerns, including the safety of bulk carriers and large passenger ships. Following the sinking of the Estonia ro-ro ferry in 1994, Mr. O’Neil established a team of experts to investigate ro-ro safety which led to important amendments to the International Convention for the Safety of Life at Sea, 1974 (SOLAS).

As part of his crucial work on the environment, Mr. O’Neil oversaw the adoption in 1997 of the MARPOL Annex VI on Prevention of Air Pollution from Ships – now expanded to include energy efficiency requirements – and the revisions of the MARPOL Convention to accelerate the phase out of single hull tankers.

Amongst Mr. O’Neil’s other landmark achievements whilst in office highlighted by Mr. Lim were the introduction of the mandatory International Safety Management (ISM) Code and the key 1997 revisions to the International Convention on Standards of Training, Certification and Watchkeeping for Seafarers (STCW), 1978.

Mr. Lim drew attention to what is, perhaps, the most visible manifestation of Mr. O’Neil’s time as Secretary-General: the striking public memorial to seafarers’ sculpture that confronts all who arrive at the IMO Headquarters building. “He wanted it”, Mr. Lim said, “to tell all delegates, visitors and passers-by a simple but significant message – that seafaring and seafarers matter. Surely, we all agree with this sentiment and recognize Mr. O’Neil’s true dedication to all things maritime”.

Turning to speak directly to Mr. O’Neil’s widow, Mr. Lim ended his tribute to her late husband, saying, “Mrs. O’Neil, Olga – I first met Bill O’Neil as a delegate to IMO. He was my mentor and friend – and I am honoured to have known him”.

After the audience had watched a video tribute to Mr. William O’Neil, Mrs. O’Neil thanked the Secretary-General for his tribute to her husband about whom she said, “He embodied everything that was good. Bill enjoyed very much his time at IMO. It is a privilege to look back on many fond inspirational moments. Secretary-General – thank you very much for your kind words. It is a great comfort to me and Bill’s family.”