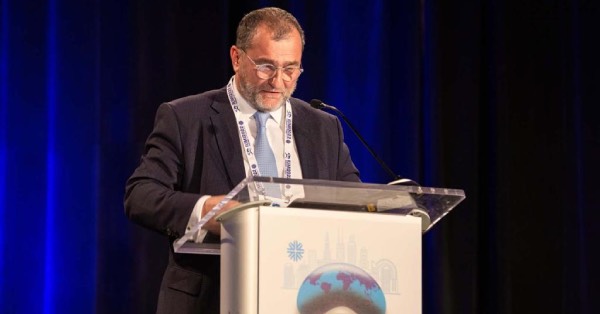 Ilias Tsakiris, managing director of Hellenic Hull Management, managers of American Club Europe, has been elected the new Chair of the Ocean Hull Committee of the International Union of Marine Insurance at its annual conference in Chicago.

It is the first time that an insurance executive from the Greek or Cypriot markets will lead IUMI’s Ocean Hull Committee and is another reflection of the prominence of the Greek and Cypriot shipping industries.

“I am honoured to take on this role,” Mr Tsakiris says. “I am committed to continuing the exceptional work of my predecessor Rama Chandran, and to support the initiatives of the newly-elected President of IUMI, Frédéric Denèfle.”

Mr Tsakiris has over 30 years of professional experience in the marine insurance sector,. He initially trained as a Master Mariner at the Hydra Merchant Marine Academy, Europe’s oldest marine academy, and he holds a degree in Maritime Studies from Liverpool John Moores University.

He started his career at sea as an apprentice Deck Officer and moved up the ranks, before coming ashore to work in London as an average adjuster.

Mr Tsakiris has been a strong advocate for IUMI’s increasing focus on sustainability in marine underwriting and educational issues.

He is a visiting lecturer in various academic institutions, including the World Maritime University and University of Piraeus.