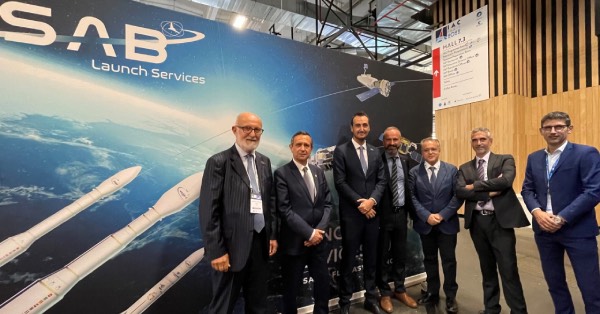 – The agreement establishes a framework contract for Deployers Procurement, CubeSat and Deployer Integration on Arianespace missions.

– This signature follows the success of Vega C maiden flight, launched on July 13 from Europe’s Spaceport. The next mission of the European light launcher, VV22, is scheduled for late November.

Arianespace, a world-leading provider of launch services for all types of satellites and destinations, and SAB Launch Services , specialized in Launch Services for small satellites, announced today, during the International Astronautical Congress, the signature of a multi-year framework agreement. The contract entrusts SAB-LS to co-operate as partner of Arianespace for the provision of end-to-end services for nanosatellites wishing to fly on Arianespace missions. The agreement is specific to the supply of hardware, mission preparation and integration services for CubeSats, and the transportation of payloads from SAB-LS European launch integration facilities, in Brno , to Europe’s Spaceport, in Kourou . This agreement enables Arianespace to expand its services and capabilities for integrating small payloads on rideshare and piggyback missions.

“This partnership with SAB-LS will provide us with increased flexibility to better address the needs of the small sat community worldwide”, explained Marino Fragnito, Head of Vega Business Unit at Arianespace. “Following the success of the emblematic mission VV16, the Proof of Concept of our Small Spacecraft Mission Services (SSMS), we demonstrated the effectiveness of our piggyback solutions with small payloads integrated on VV19 and VV20. With Vega C, qualified with its maiden flight on July 13, we have an increasing number of opportunities in our manifest. This availability, coupled with our cooperation with SAB-LS, will allow Arianespace to answer the booming demand for small sat services.”

“At SAB we are really excited with this agreement, which recognizes all the efforts done since 2018 to push the Vega services among the small satellites community”, said Marco Mariani, CEO of SAB Launch Services, during the signature ceremony. “SAB-LS has been created following the SSMS development carried out by our sister company SAB Aerospace. We started as the SSMS institutional CubeSat integrator and we have been strongly supporting the launch services from Europe. Thanks to SSMS services for small satellites, we are now witnessing an increasing appreciation from the market for European launching solutions. I think that our commitment to Vega and the close cooperation with Arianespace’s team has been recognized and has allowed us to reach this strategic agreement. This positions SAB as the main partner of Arianespace for the provision of services to nanosatellites. We consider Arianespace a long term strategic partner, and we aim at expanding our collaboration to new services.”

This agreement follows the success of the Vega C maiden flight, launched on Wednesday, July 13, at 10:13 am local time in Kourou. The next Vega C mission, VV22, is planned for late November 2022.

In total, there are already seven Vega C that have been filled and will serve both institutional and commercial missions. This has been possible in particular by leveraging the capability of the SSMS Dispenser, the hardware developed to optimize multiple Small Satellite missions on Vega and Vega C. The SSMS Dispenser is a modular structure, which can be flexibly configured in order to be adapted to the specific satellite aggregate.