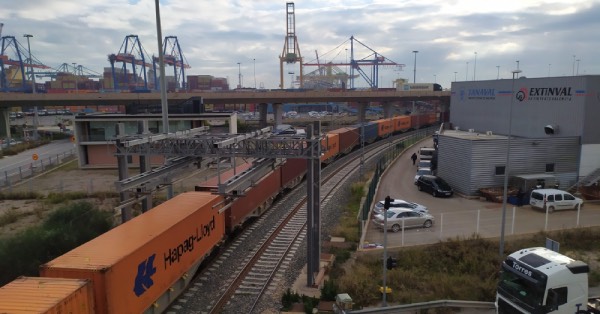 Every week there are more trains, they are longer, have more wagons and carry more tonnes and containers.

The average traffic rises to 83 trains per week in the first half of the year compared to 77 in 2021. The increase in rail traffic has experienced in some weeks increases of more than 20% and 40%.

The port area is gaining share in the use of rail. Between January and June, more than 2,100 trains have already run through the Port of Valencia.

The average length of trains has been 493 metres, 20% longer than last year. 6% more containers have been transported than in the first half of 2021.

The Port Authority of Valencia is earmarking 240 million Euro to improve intermodality and the inland railway network.

The railway is becoming more and more important in the Port of Valencia. During the first half of the year, more than 2,100 trains have entered or left Valenciaport’s port facilities to optimise logistics activity and provide a better service to customers based on economic and environmental efficiency. A weekly average of more than 83 trains compared to an average of 77 for the same period in 2021, which reinforces the commitment of the Port Authority of Valencia (APV) to the synergy between maritime and rail traffic.

The president of the APV, Aurelio Martínez, stressed that “the investment effort that Valenciaport has been making in recent years, with more than 240 million euros, is paying off. The railway is a key element in the movement structure of the Port of Valencia, as the data show. Our aim is to keep on increasing this traffic share, betting on the train, long-distance lines and the improvement of the infrastructures of our inland network”.

So far this year, the increase in rail traffic has experienced in some weeks increases of more than 20% and 40%, especially in the last weeks of July where it has gone from 65 trains in 2021 to 85 this year.

In total, 1,043,297 tonnes have been handled in this first half of the year, 6% more than in the same period last year. Of these goods with destination/origin Valenciaport, 7 out of 10 are from Madrid, a key place that will be reinforced with the rail motorway that will link the Port of Valencia with Madrid.

The APV’s objective for the coming years is to continue to increase the use of the train in freight traffic arriving and departing from Valenciaport, hence the importance of undertaking the necessary actions to adapt rail accessibility. Thus, the APV is making investments to take advantage of the synergy between maritime and rail transport in order to promote competitiveness and contribute to the reduction of CO2 emissions.

Specifically, for the coming years, investments of around 240 million euros are planned to promote accessibility and improve Valenciaport’s rail network. These actions are aimed at the remodelling of the railway network in the Port of Valencia, the electrification of tracks, the adaptation of the network to the European gauge, the railway access to the Port of Sagunto or the improvement of the Valencia-Teruel-Zaragoza line, among others.

Thus, for example, the APV is committed to key infrastructures such as the Cantabrian-Mediterranean Corridor, which is fundamental to favour the work of exporting companies in Aragon, but also to bring the markets of Navarre, La Rioja and the Basque Country closer to the Port of Valencia. The APV is also working, together with ADIF, to promote the first rail motorway linking the port area with Madrid.

Commitment of the shipping companies

The efforts and commitment of the companies operating in Valenciaport should also be highlighted. In this sense, MSC started up a rail service dedicated exclusively to reefer (refrigerated) transport between Valencia and Zaragoza. For its part, the French shipping company CMA CGM has a new rail service between Valencia and Zaragoza. CSP Iberian Rail has also added a new link with Lisbon/Leixões, the first to cross the peninsula from coast to coast, furthering its strategy of becoming a global intermodal logistics operator. To this must be added the services it offers with Madrid, Zaragoza and Vitoria. In fact, around ten different railway companies operate in the Valencian area, linking up with the main corridors in Spain: Central, Mediterranean and Cantabrian.