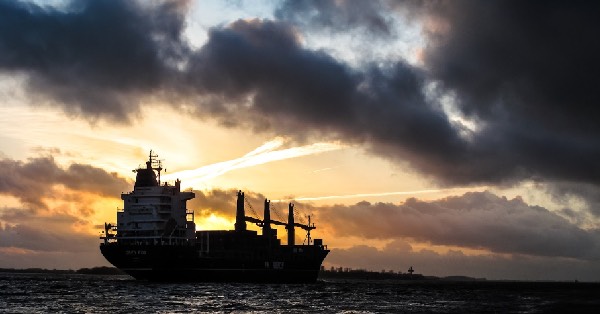 Commercial ships impact the environment most when on passage at sea.  It is during this phase of the voyage that many vessels will be burning heavy fuel oils and encountering challenging whether and sea conditions.  In part-6 of our special series on digital decarbonisation, we explore the area where digital decarbonisation shines the most and where all the digital innovation seems to be  – voyage optimisation.

Perhaps the most fruitful area for digital decarbonisation and certainly the most targeted by digital innovators, is the voyage phase when ships are at sea and their engines are at their most polluting.

Conditions at sea can vary considerably and vessels must be capable of withstanding bad weather and sometimes violent sea states while keeping cargo and crew safe. This requires hull and propulsion system designs that offer power and stability in reserve and while naval architects and ship builders are well-practised at delivering safe ships, rough weather and sea conditions have a naturally adverse effect on energy efficiency.

The market for digital ship operations and management technology is young and growing fast. Thetius data indicates that digital transformation in this area is currently an US $11bn industry with a compound annual growth rate of approximately 4.5%. Of all of the decarbonisation markets tracked by Thetius, ship operations is the busiest with over 600 active organisations across the world. Most are startups which account for 29% of the market, followed by small and medium enterprise (SME) providers at 25%, closely trailed by large enterprises at 23%.

Thetius data indicates that digital transformation in this area is currently an US $11bn industry with a compound annual growth rate of approximately 4.5%

The biggest opportunities for digital decarbonisation in the sea phase involve processing large dynamic data sets to plan voyage routes that avoid adverse weather, foul tidal and ocean currents, and costly diversions around hazards.This includes intelligent cargo planning that minimises route inefficiency and avoids backtracking or in-ballast voyage legs with no payload on board. Here we will take a look at some of the most interesting businesses and technologies offering efficiency solutions that target the at-sea phase of the ocean supply chain.

Tracing its origins to Maersk Tankers, Copenhagen-based platform developer ZeroNorth now offers digital optimisation solutions aimed at reducing GHG emissions across the tramp shipping sector. Their principal offering ‘Optimise’ is a piece of software that converts voyage data into actionable insights which they say translates into environmental and financial savings that benefit the industry and wider society. The system connects multiple data sources into a single interface which is analysed to produce recommendations for speed, route, and bunker optimisation.

In March, ZeroNorth revealed that its platform had prevented 218,000 tonnes of CO2 from being released to the atmosphere throughout 2021, coinciding with a time when shipping’s emissions as a whole increased by 4.9%. They have also announced this year that their platform now includes an automated CII calculation. By combining a variety of vessel, market, bunker, and weather data with its algorithms, the ZeroNorth platform suggests a ‘green route’ that considers emissions and profitability in order to improve or maintain the vessel’s CII ratings.

In 2020, ship operator Cargill reported achieving an overall reduction of 5% in CO2 emissions per cargo ton-mile against a 2016 baseline, partly as a result of its partnership with ZeroNorth. However, type-specific reductions were even higher, with their larger panamax dry bulk ships having a 6.7% decrease and 14.4% across its tanker fleet, according to Cargill data. One of the key reasons that technology is able to find these savings, where human counterparts have been unable, is down to complexity. To optimise a transoceanic multi-port voyage requires a detailed understanding of millions of data points and variables.

In 2021, capesize tanker operator Seanergy Maritime Holdings announced that using the Pythia platform had achieved a reduction in fuel consumption of up to 12% across their fleet over a four month trial, with average fuel savings of 8% per vessel. Pythia uses AI performance models to analyse 19 different parameters, enabling it to determine optimum routes, speeds, and trims that are required to minimise fuel consumption along the route.

Weather conditions are particularly difficult to predict and quantify, and adverse weather is particularly costly to fuel consumption when encountered by a ship. There are many scenarios where deviating from the direct route in order to avoid bad weather will result in less fuel burned over the voyage. But determining when this will be the case and how the vessel ought to be diverted is notoriously complex for voyage planners and navigating officers. Weather is not the only reason for diverting from the direct route (known by navigators as the ‘rhumb line’) either. Hazards to navigation and channel blockages are a constant possibility, altering the safe routes available to transiting ships.

In 2018, route analysts from voyage services provider StormGeo advised on approximately 64,000 voyages across the world. With an average consumption of about 30 MT of fuel per day and average voyage time of 17.5 days, the total consumption for all of these voyages was estimated at around 33,750,000 MT. The company estimates that their weather routing service alone can result in a 3% reduction in consumption on average, saving over 1 million tons of fuel over the year, equivalent to the removal of 600,000 cars from the road. Optimising fuel management along different routes also plays a role in environmental outcomes and profitability.

According to Storm Geo, in 2019 they routed a bulk carrier around the North Sea Emissions Control Zone (ECA). The route they suggested covered a slightly longer distance to the standard route, however analysts calculated that while the vessel would consume 37.52 MT more Intermediate Fuel Oil (IFO), the vessel would use 36.58 mt less of the more costly low-sulphur fuel oil. At a price differential of around $250 between the fuel grades at the time, the monetary savings ran to about $9,000.

In another example, StormGeo were able to save Aurora Tankers around 33 hours and $13,940 on one voyage. Route analysts closely evaluated the captain’s intended route and recommended an alternative based on real-time weather forecasts, Emission Control Areas, known piracy areas, and client-instructed arrival times. While StormGeo’s recommended route was nearly 400 NM longer than the captain’s intended route, it was carefully designed to place the vessel to the south of heavier swells generated by northern Pacific Ocean storm centres, while positioning the ship in more favourable ocean currents. By choosing to sail along the optimised route, Aurora Tankers halved the weather factor on the voyage from -1.56 to -0.76, minimising weather risk and saving valuable time. The company saved approximately 41MT of fuel and reduced the voyage’s CO2 emissions by 123 MT; roughly equivalent to removing 26 cars from the road for an entire year.

In partnership with Inmarsat, Thetius launched a major report on digital decarbonisation at the Nor-Shipping conference in April 2022 to critical acclaim. Read by thousands of industry professionals across the globe, The Optimal Route examines the impact of digital technologies on the trajectory of decarbonisation in shipping.

Based on the findings of this research, we have put together a new series of articles on digital decarbonisation which will be released to our subscribers over the coming weeks.  Each article will zoom in on an aspect of digital decarbonisation and together will provide a jam-packed analysis that includes the latest and greatest examples of how digital technologies can prove the difference between success and failure in decarbonising the ocean supply chain.