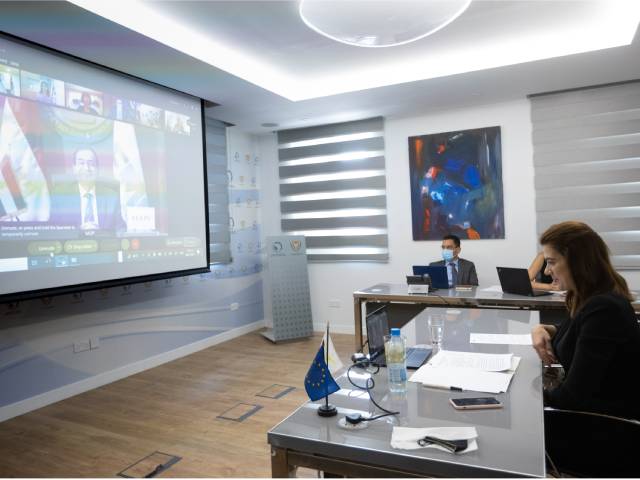 The meeting was convened by the President of the EMGF, Minister of Petroleum of Egypt Mr. Tarek El Molla and was attended by, on behalf of the Member States, the Ministers of Energy of Cyprus, France, Greece, Israel, Italy, Jordan and Palestine. For the first time, the US watched the meeting as an “observer”.

In a Joint Declaration adopted at the 5th Ministerial Meeting, the Energy Ministers of the eight EMGF member countries reaffirmed their determination to continue working towards the Forum’s objectives, with full respect for its members’ rights over their natural resources and in accordance with international law.

At the same time, important milestones from the Meeting are, among others, the accession of the World Bank and the European Union to the EMGF as “Observers”, the signing of an agreement for its headquarters in Cairo, as well as the launch of its official website, which is the first official communication platform of EMGF (https://emgf.org/).

The next EMFG Ministerial Meeting was agreed to take place in Cairo in the last quarter of 2021.

In her own speech at the opening ceremony of the Meeting, the Minister of Energy of Cyprus welcomed the representatives of the World Bank, but also of the European Union, who joined the Forum as “Observers”, while referring to the important technical and financial support provided by the two institutions already provided in the Forum’s activities. “The enlargement of the EMGF, which as of today has 8 member countries, 3 observers and 32 members in the Advisory Committee on Gas Industry, demonstrates the prospects of the Forum, as well as the support it enjoys both in the wider region and internationally,” Mrs. Pilides said.