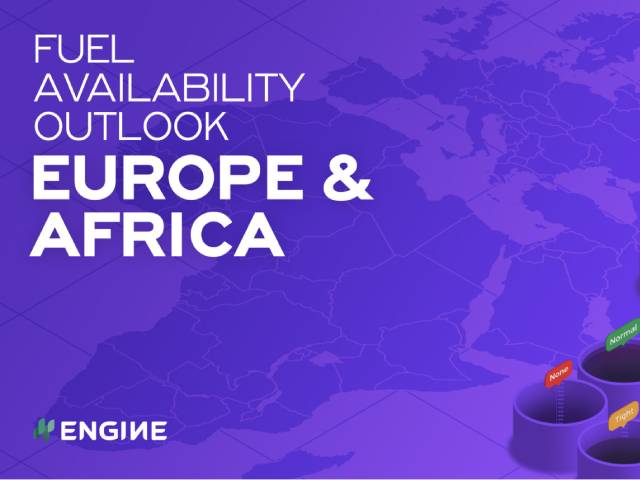 VLSFO and LSMGO grades are plentiful across Europe and Africa, while pockets of tightness for HSF380 remain in the Mediterranean and Black Sea this week.

ARA and Gibraltar Strait ports have readily available supplies of all grades, and lead times for HSFO380 are around 2-3 days, which is still significantly lower than in other major ports such as Singapore and Fujairah.

Rotterdam has Europe’s lowest prices for the grade. Only Far East Russian ports like Vladivostok can compete with lower prices than Rotterdam.

Fuel oil inventories are ample in ARA. Even after shedding 4% last week they remain comfortably above their five-year average. A weaker HSFO export pull from the Middle East has left more fuel oil in ARA storage.

Longer lead times of around six days are recommended for HSFO380 stems in Canary Islands ports, where two suppliers offer the grade.
HSFO380 has also been tight for prompt delivery dates in Russian ports including Novorossiysk and off Malta. Only one supplier offers the grade in Malta, and only two of the 4-6 supplier that typically stock it in Novorossiysk offer it now. However, supply and demand are more balanced in Novorossiysk now than in previous weeks, sources say.

ARA’s independent gasoil inventories remain below their five-year average and shrank by another 5% last week.

Gasoil and diesel demand has seen a strong recovery this year, driven by increased industrial activity and consumer product demand. Further growth is expected as economic activity is set to get a boost from fewer mobility restriction in European countries.

ICE gasoil swaps are in a slight contango between the front and second months, before tapering off by around $7/mt for the December contract.

VLSFO prices are forecast to weaken in coming months and Rotterdam’s forward curve has moved into a steeper backwardation, with $8/mt between the August and December contracts now.

Bunker congestion is minimal in Gibraltar, Algeciras and Ceuta. Four vessels were waiting to bunker in Gibraltar and a supplier was running 4-6 hours behind on its barge schedule on Wednesday.

Bouts of bad weather are on the horizon for Gibraltar Strait ports. Strong winds from the west and high swell could disrupt bunkering at Gibraltar’s western anchorage from Thursday afternoon, according to port agency MH Bland. The rough weather is forecast to intensify in strength on Friday, before calming on Saturday.

Fuel availability continues to be good for low sulphur grades in South African ports. Prompt VLSFO and LSMGO are possible.
Port Elizabeth has high swell and strong wind gusts forecast from Wednesday and set to last for a week, potentially hampering bunkering at the Algoa Bay anchorage. Waves are forecast to peak at 4.8 metres on Friday.