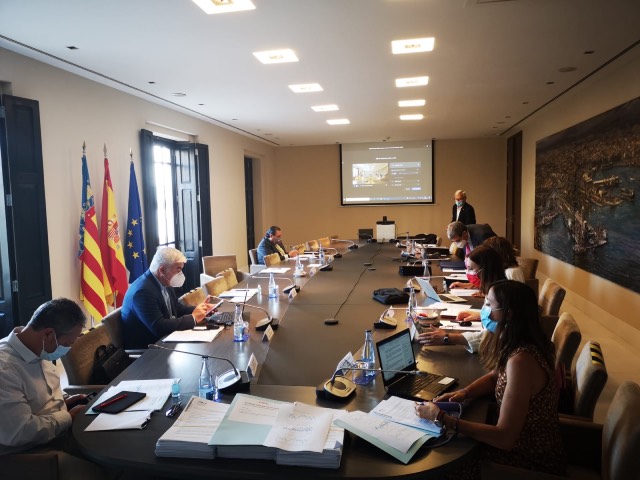 The Port of València works with more than 4,000 trains a year managed by 10 different companies, at a rate of 80 convoys a week.

11% of the goods that are imported or exported from Valenciaport arrive or leave the port by rail; a percentage that is almost three times higher than the ratio of what is transported in Spain by train (4%).

Half of the 28 million tonnes transported by rail in Spain have a port as origin or destination.

Valenciaport is a great ally of the business fabric of its hinterland to position its products in any corner of the world in a sustainable and efficient way.

The improvements in the railway networks, such as the Zaragoza-Teruel-Valencia line, are already reflected in traffic. If in 2017 the average number of trains per week was five, in 2021 it will be 30 services, with a peak week of 44 goods trains per week.

The Port Authority of Valencia (PAV) has its eyes set on the railway. The port managers are thinking in train mode. It is the future. The proof is that the PAV has created its own unit to manage the railway traffic inside the Port of València, where 10 different companies already operate and compete, and what is more relevant, it is working with investment plans related to the train – for València and Sagunto – worth 238.1 million euros.

“For Valenciaport, the train is basic and fundamental because for years we have been building a port of reference in the Mediterranean based on intermodality. The railway is key in our present and future strategy because it allows us to reduce costs in the logistics chain, to improve the services we offer in the terminals and to take loads off the road and put them on the railways. Lorries will always be the benchmark for agility, accessibility and ductility, but rail will allow us to improve connectivity with our peninsular hinterland, connecting it with the main industrial centres. The train fits in our decarbonisation route and in our Plan 2030, zero emissions, and we are going to focus a great part of our investment effort on it”, explains Aurelio Martínez, president of the PAV after reporting this morning’s Board of Directors about the investments Valenciaport plans to make in the railway for the next years.

The use of rail as a means of freight transport is still far away from lorries. At present, goods transported by train account for barely 4% of the total freight transport in Spain, compared to an average of 18% in the European Union. In the case of Valenciaport, 11% of the import/export containers it handles are moved by rail (just over 200,000 TEUs in 2020), which is a clear demonstration that the use of the train in the Port of Valencia is above the Spanish average both for the transport of containers and cars, non-containerised cargo and bulk. In fact, in terms of containerised goods moved by train, Valenciaport is three times the Spanish average, which stands at 4%.

The PAV’s objective for the coming years is to continue to increase the use of the train in freight traffic arriving and departing from Valenciaport, hence the importance of undertaking the necessary investments to adapt rail accessibility.

Specifically, more than 125.5 million euros are planned for the next few years to improve rail accessibility in the Port of Valencia. Thus, the investment plan contemplates actions such as:

Regarding the Port of Sagunto, 97.6 million euros in investments:

To which must be added 15 million euros for the Vicálvaro Intermodal Station.

More than 80 trains per week

According to the Global Innovation Index, Spain ranks seventh in the world in infrastructures, but falls to 28th place when it comes to rail transport. For this reason, Martínez has made a call for the coming years to the Administrations “to prioritise investments where there are gaps, such as rail connections to the south (Mediterranean corridor), the area of the Basque Country (Cantabrian Corridor), the double platform for goods or interconnectivity and access by train between ports or airports”.

In the last year, more than 4,000 trains have entered and left Valenciaport, with an average of more than 80 convoys a week linking the Valencian docks with the main corridors in Spain: Madrid Centro (Valencia-Madrid-Lisbon/Sines), Mediterranean Corridor or Mediterranean Cantabrian Corridor (Valencia-Sagunto-Teruel-Zaragoza-Bilbao/Santander) ; from where they link with the exporting enclaves of all kinds of industries such as automotive (Ávila, Valladolid, Vigo, Palencia…), iron and steel, bulk, agri-food products (Granada, Seville Extremadura, Ciudad Real) but also other products that are transported through refrigerated trains such as agri-food or chemical products.

The logistics alliance between Valenciaport and its hinterland is reinforcing its role as a port of reference for the productive fabric in Spain, channelling a large part of foreign maritime trade, which is key to the recovery of economic activity. The Valencian port precinct is the first Spanish port and the fourth European port with the best connectivity according to the Port liner shipping connectivity index (LSCI) drawn up by the United Nations Conference on Trade and Development (UNCTAD). In this way, the Port of Valencia is once again the fourth European port in this ranking and the twentieth worldwide. Valenciaport maintains commercial relations with almost 1,000 ports in 168 different countries. Valenciaport operates with 98 regular lines managed by 35 different shipping companies. An operation that highlights the value of Valenciaport as a driving industry at the service of the logistics community and the Spanish import/export business network.

“Our commitment to the railway is evident, both in the plans for investment in intermodality and the laying of double tracks within the port area. But we have also earmarked income obtained from our port customers to invest euros from the Port of Valencia in the lands of Teruel and Zaragoza; to improve railway connections with Aragon, a strategic enclave for the Valenciaport Community. In this case, the results showed almost instantly, going from just a couple of trains a week to more than 30; but in the end we have to be aware that the train, due to the Spanish geographical structure, will always compete with the lorry. And in any case, it will be the exporter or importer who will decide how they want their purchases or sales to be taken home, to their shop or to their factory”, Martínez points out.

Results from the first minute

Investment in improving the railway network is yielding results as work progresses. This can be seen in the works on the Zaragoza-Teruel-València line of the Cantabrian-Mediterranean axis, which are progressing at a good pace, and especially in the construction of eight 750-metre-long sidings at stations located in Aragon and the Valencian Community. Thus, for example, with the entry into service of the overland train on this line, freight traffic per week has increased significantly. If in 2017 the average number of weekly trains to the Port of Sagunto was five, in 2021 it will be 30 services, with a peak week of 44 goods trains per week.

These advances are evidenced by the main shipping companies that are already including the València-Teruel-Zaragoza route in their routes. In this sense, MSC started up a rail service dedicated exclusively to reefer (refrigerated) transport between Valencia and Zaragoza, while CSP Iberian Rail is already operating its new rail service linking the Port of Valencia with Zaragoza, with an initial frequency of three weekly rotations with a composition of 56 TEUs each. In addition, the French shipping company CMA CGM is finalising a new rail service between the Valencian precinct and Zaragoza, a new link, part of the company’s ‘Switch to Rail’ product, which will have three weekly departures and allows significant flexibility for goods.