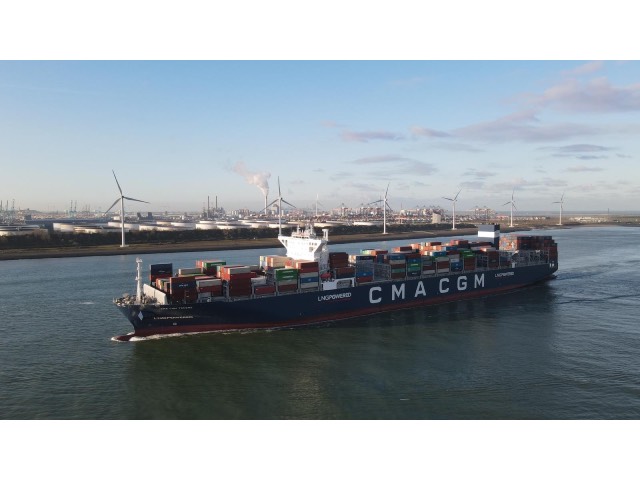 The CMA CGM TENERE is the first of six 15,000-TEU container ships chartered by the CMA CGM Group and powered by liquefied natural gas (LNG).
•    LNG represents a forward-looking technology that helps to preserve air quality and accelerate energy transition in the shipping industry.
•    This first bunkering comes a week before that of the CMA CGM Jacques SAADE, the world’s largest LNG-powered container ship.
•    LNG is delivered by Total with the world’s largest LNG bunker vessel, the Gas Agility.

LNG: a forward-looking choice to help preserve air quality and an energy source of the future
In November 2017, Rodolphe Saadé, Chairman and CEO of the CMA CGM Group, made the visionary choice to equip the Group’s nine 23,000-TEU container ships with LNG engines. This was a first in the shipping industry for vessels of this size. The decision showed the CMA CGM Group’s determination to take action in favor of energy transition in shipping.
LNG is currently the industry’s best method for preserving air quality. It exceeds current regulatory requirements, cutting emissions of sulfur oxides and fine particles by 99% and of nitrogen oxides by 85%. LNG also provides an initial response to the challenge of tackling climate change. An LNG vessel emits up to 20% less CO2 compared with a vessel powered by fuel oil. LNG technology is one of the first steps that the CMA CGM Group is taking towards its target of achieving carbon neutrality by 2050.

A fleet of 26 LNG-powered container ships by 2022
The CMA CGM TENERE, delivered on September 15th, and her five sister ships chartered by CMA CGM, are being built by Hyundai Samho Heavy Industries for Eastern Pacific Shipping. They will be delivered between now and the end of 2022. They are joining the Group’s flagship, the CMA CGM JACQUES SAADE, the world’s largest LNG-powered container ship, which is expected to complete its first bunkering in Rotterdam on November 12th.
All together, by 2022, the CMA CGM Group will have 26 LNG-powered vessels with total capacity of 380,000 TEUs.
The Group has formed a major industrial partnership with Total to supply LNG for these ships. CMA CGM is therefore driving the creation of a genuine excellence centre for the use of LNG in the shipping industry.